President Bush and Sen. John Kerry crisscross the nation from Florida to the Midwest on the last weekend of campaigning before the national election. The two candidates urged their party faithful and independents alike to vote Tuesday. Hear NPR's Andrea Seabrook and Don Gonyea. 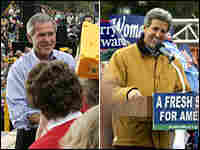