Accessibility links
Desert Locusts Plague West Africa Swarms of desert locusts many miles long descended on West Africa this summer and fall -- the worst invasion of these voracious pests in more than 15 years. 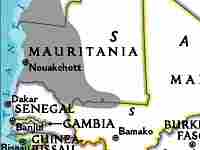 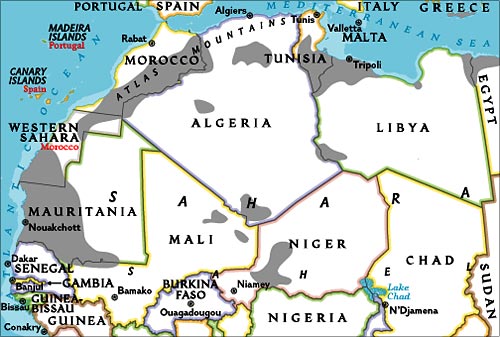 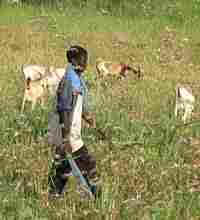 A herdsman in Senegal grazes his goats in the middle of a locust swarm. Richard Harris, NPR hide caption 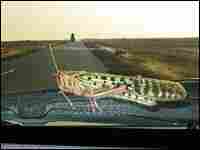 A brightly colored locust from a swarm lands on a car windshield in Senegal. Richard Harris, NPR hide caption 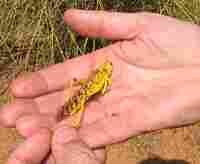 Locusts begin their lives as ordinary green grasshoppers, but a number of factors -- mainly climate and proximity to other hoppers -- cause the insects to mutate into three-inch flying pests that swarm by the millions. Richard Harris, NPR hide caption 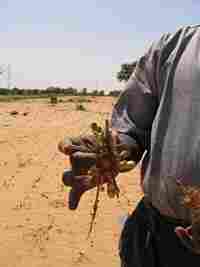 A farmer in Senegal holds all that's left of a peanut crop devastated by locusts -- the green tops all but gone, and a few meager nuts underground. Richard Harris, NPR hide caption

Swarms of desert locusts many miles long descended on West Africa this summer and fall -- the worst invasion of these voracious pests in more than 15 years. NPR's Richard Harris ventured to Senegal to find the locusts, and talk to farmers who have suffered the consequences of this invasion.

The life-cycle of the locust is truly remarkable. Locusts start off as ordinary green grasshoppers, who actually prefer to be alone. But if the young "hoppers" are crowded too close together, it triggers a change in their body and their behavior. They grow and shed their skins, eventually mutating into leaner, meaner locusts.

With food to eat and sufficient moisture, the mature locusts lay eggs in the soil -- and when the eggs hatch, there's a 400-fold increase in their numbers. The crowds turn into swarms that continue the cycle. In a few generations, the locust population can number in the billions and single swarms can stretch for miles. Each bug can eat its own weight in vegetation in a single day, and hundreds can pack into one square yard of ground.

In the past few years, the rains have been abundant in Senegal and other nations on Africa's West Coast. That's good news for farmers, but also a perfect breeding ground for locusts.

Harris teams up with Carl Castleton, an entomologist for the United Nation's Food and Agriculture Organization, who's touring West Africa to study the locust problem. They examine first-hand the Biblical devastation wrought by the pests -- whole peanut fields, Senegal's biggest cash crop, denuded to the bare soil by flying swarms of locusts.

Not far from the banks of the Senegal river, the Radio Expeditions team is suddenly in the midst of a swarm of three-inch-long insects, like flying shrimp.

"They're a beautiful beast, with dark pink legs, spotted wings... they're very soft to the touch," Castleton says. "If they survive, they'll be heading north into Mauritania. Maybe some of the individuals we see here might make it as far north as Morocco and reach sexual maturity... You're talking about an insect that's quite capable of moving 500 miles in a day."

The fight against the desert locust is truly a war -- Senegal has mobilized its army against the insect invaders, neighboring countries have formed strategic alliances, and there's even an air force in the form of squadrons of crop dusters, dropping pesticide on the swarms.

Critics say the fight against the locusts got off to a slow start, mostly because international donors didn't listen when biologists first warned that the swarms were coming. The U.N. Food and Agriculture Organization raised the alarm more than a year ago, but donor nations wanted hard evidence of a crisis.

So the swarms grew unchecked, as did the price tag to control them. In October 2003, the U.N. food agency said $9 million would be enough to prevent a massive invasion. But nobody came up with the money, and now the price tag is closer to $100 million.

Exterminating locusts has gone high-tech, with close coordination of aerial spraying and pesticides that narrowly target the insect to decrease harm to humans. But at best, the spraying kills about 85 percent of a swarm. Castleton expects that plenty of locusts will escape to breeding grounds to the north, and they'll return next year to Senegal and other countries in the Sahel region of Africa.