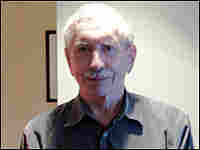 Edward Albee spoke about his favorite scenes in a visit to NPR. hide caption

Playwright Edward Albee, author of Who’s Afraid of Virginia Woolf?, acknowledges a major influence in his work: Samuel Beckett. In fact, the Irish playwright known for terse, often absurd, dramas created two scenes that make Albee a bit jealous: one in Happy Days and another in Krapp's Last Tape.

A night of the pair's short dramas, called simply Beckett/Albee, opened Off-Broadway in 2003, some 40 years after short works by Albee and Beckett were performed on the same stage in Berlin.

Scene from a BBC Radio production, with Geraldine McEwan as Winnie.

NPR's Susan Stamberg spoke with Albee about both his own work and Beckett's plays. To illustrate his appreciation for Krapp's Last Tape, the story of a man who repeatedly plays a tape of his own life, Albee read a favorite scene.