Accessibility links
A Sticky Dilemma: Lead in Mexican Candies Health officials are urging a crackdown on candies and snacks imported from Mexico because many brands are contaminated by trace levels of lead. But the ban might prove difficult to enforce, because kids love the tart-hot-sweet flavors of Mexican snacks, and street vendors are difficult to regulate.

Preventing children from exposure to lead has long been a priority for U.S. federal health officials. Until recently they could say they were winning the battle. But in recent years, a new danger has surfaced: imported Mexican candy.

Popular in the Los Angeles area for its spicy, lemony and sugary flavors, some candy from south of the border is contaminated with toxic traces of lead. NPR's Mandalit del Barco reports that some tainted candy may soon be officially banned. But stopping the sale entirely is a more difficult proposition. 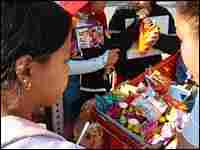 Read an 'Orange County Register' Series on Toxic Treats, Including a Guide to Lead-Tainted Candies