Accessibility links
'Fork It Over': Alan Richman's Adventures in Dining Writer Alan Richman shares a booth with NPR's Karen Grigsby Bates at the famous Los Angeles greasy spoon diner The Pantry to talk about restaurant etiquette and eating well when someone else is cooking. Richman is the author of Fork It Over: The Intrepid Adventures of a Professional Eater.

Only Available in Archive Formats.
'Fork It Over': Alan Richman's Adventures in Dining 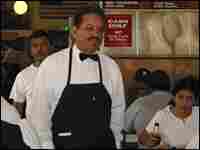 Jesse Villa has worked at The Original Pantry Cafe in downtown Los Angeles since 1966. The Pantry is a revered institution -- not so much for its food, which is diner-simple, but because the restaurant has character, serves huge portions and never closes. Karen Grigsby Bates, NPR hide caption 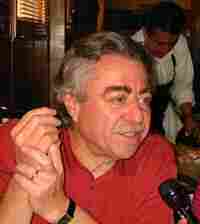 Restaurant critic Alan Richman at The Original Pantry Cafe in Los Angeles explains what makes a "joint" a "joint": "For one thing, there are no tablecloths." Karen Grigsby Bates, NPR hide caption 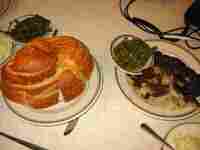 Just some of what you get at The Pantry: fresh sourdough bread, veggie of the day, coleslaw, and one of the Pantry's famous hamburger steaks, hidden beneath an avalanche of home fries. Karen Grigsby Bates, NPR hide caption

Alan Richman shares a booth with NPR's Karen Grigsby Bates at the famous Los Angeles greasy spoon diner The Pantry to talk about restaurant etiquette, the 10 Commandments for Diners and eating well when someone else is cooking. Richman is the author of Fork It Over: The Intrepid Adventures of a Professional Eater -- below are excerpts from the book:

(1.) Don't give them your credit card until after dessert. Restaurants have started asking customers to guarantee reservations with credit cards. Don't do it. Assure them you'll show up. Promise them you'll call to re-confirm -- thoughtful restaurants will even provide special numbers for this service. Frankly, if restaurants want to start acting like hotel chains, they should offer similar perks, like frequent-diner upgrades. ("Ma'am, your pork loin tonight will now be prime rib – at no cost to you.")

(2.) Pay no attention when the waiter suggests a "favorite dish." I sympathize with waiters, I really do -- they're hard-working, starving actors barely surviving on one meal a day. But I never listen when they recommend their so-called favorite dish, the warm fricassee of roasted root vegetables with black truffle jus. The only jus they've ever tasted is canned gravy. It was a sad day in American dining when waiters decided their job was to give orders, not take them.

(3.) Insist on a glass of fresh, tasty ice water. Restaurants are not selling bottled water to keep you hydrated. They sell it because it costs them 75 cents and they can charge $9.75. Unless the civil defense agency of the state where you are dining has declared a water-rationing emergency, restaurants should place tap water on every table. Tap water is your friend.

(4.) Don't order steak at a seafood restaurant. However, seafood at a steakhouse is never bad.

(5.) Pass on the omelet station. You're on vacation, ready to splurge -- that means the hotel's $39.95 Sunday buffet brunch. There's salmon, sushi, crab claws, shrimp and eggs Benedict. You head straight for the omelet station, where a guy in a Hawaiian shirt who has never been to cooking school is making fluffy four-egg omelets with scallions, peppers, Bac-o-Bits and a grated cheese product. Nice going. You've just filled up on an egg dish that costs $3.99 at Denny's.

(6.) Stand up for the coat-check girl. Many restaurants have decided to profit from the decades of good will and affection that (male) customers have for coat-check girls. They do this by paying her a (meager) salary and keeping the tips for themselves. Shades of Oliver Twist -- that buck or two that you press into her delicate palm is immediately snatched away. So I always ask the coat-check girl if she's permitted to keep her tips. If she tells me she isn't, I don't leave one. What I do is complain to the manager.

(7.) Demand to see the chef. If dinner for two is costing $200, you have every right to expect the chef to be at work. Restaurants where the famous celebrity chef has taken the night off (or, more likely, is making a few thousand bucks cooking at a corporate event) should post a notice, similar to the ones seen in Broadway theaters: "The role of our highly publicized head chef will be played tonight by sous chef Willie Norkin, who took one semester of home economics at Scarsdale High School and can't cook worth a damn."

(8.) Never order the house wine. Anything is better. Lager brewed from the toxic waters of America's Great Lakes, flat tonic water from the bartender's soda gun -- no matter what beverage you request, it's going to be better than the house wine, which often comes from a box. If there are two of you having dinner, order the cheapest bottle on the list, even if you know you won't be able to finish it. And, please, whatever you do, don't sniff the cork -- you'll learn nothing, and only smudge your nose.

(9.) Never eat a dish credited to the chef's mother. Honestly, do you really think mom is back there at the stove? Maybe, just maybe, if you're driving through Italy and stop for lunch in Piedmont, you might find a sweet old lady chained to a chair in the kitchen, forced to make a few thousand angnolotti before lunch. This doesn't happen in America. Any restaurant dish called "Mama's" was cooked up by some ungrateful son who probably hasn't called home in two and a half years.

(10.) Even worse is a dish invented by the chef's father. Because dads can't cook.

(1.) Don't underestimate our intelligence -- or our math skills. I once ordered the $3 cheese plate at a New York restaurant, and got an ungarnished chunk of "cave-aged" gruyere so tiny that I shook my head in despair. The waitress huffed, "It's a full half-ounce." Maybe the cheese was raised in a cave, but I wasn't. Using my junior high math skills, I calculated that the gruyere was going for a mere $96 a pound -- the sort of mark-up that would make even truffle salesmen blush.

(2.) Don't put me on hold more than once. Maitre d's (sorry, reservationists) have mastered this art. "May I put you on hold?" asks Chad, who punches the button before you can reply. I'll put up with this once, but when Chad does it again, I hang up and never call back. Restaurants that continually have customers listening to Kenny G's greatest hits should have a truthful recorded message: "We're so popular we don't give a damn if you come to our restaurant, so we're putting you on hold again and again, and if you even think of complaining your name will go on our black list and you'll forever be deprived of our $90 'market menu' consisting of small portions of stuff the chef got cheap."

(3.) Don't send us to the bar as punishment. The all-too-common phrase "your table isn't quite ready" invariably means the customer is sent off grumbling to a packed bar. Restaurants that can't honor reservations on time should offer some sort of consolation to inconvenienced guests, even if it's nothing more than a complimentary glass of the not-very-good house wine. The first kind word to a customer shouldn't come after he's seated, when the bread boy asks in various fractured languages, "You want the chapati, the focaccia or the ficelle?"

(4.) Don't push the Austrian Zweigelt unless you know something about it. Wine lists are becoming packed with obscure bottles from all over the world. Having a Portuguese Castelao on a list is fine as long as there's a sommelier on hand to describe it, but too many restaurants are leaving the job to waiters who have no clue -- no restaurant would put barramundi on its menu without explaining that it's an Australian game fish. By the way, both the Zweigelt and the Castelao are red.

(5.) Specials should never be expensive. Nothing is more annoying than an off-the-menu cote de beouf special for two that turns out to cost $38.95 per person, way out of line with other prices. Granted, the waiter who lovingly described the steak to you shouldn't have to announce the price -- that makes everybody feel cheap and creepy. But if a maitre d' with a phony Italian accent is going to shave white truffles over your tagliatelle, the dish shouldn't cost $72, unless everything else does. Nobody should have to take out a home equity loan just to afford the venison preparation of the day.

(6.) Knock off the "day boat" routine. Sure, like I really believe there's an armada of fishing boats sailing off every morning at daybreak and returning at dusk, just so every restaurant in America can put day-boat halibut or day-boat cod on its menu.

(7.) Waiters must never "who gets the soup?" interrupt. I know, I know, our waiter is very busy. A lot to do. There isn't a waiter alive who doesn't believe the restaurant would close without him. That's why he can't wait for me to finish my sentence before he interrupts my lively conversation to ask the eternal question, "Would you like fresh pepper on that?"

(8.) Don't ask "is everything all right?" unless you want an honest answer. In a world filled with perfunctory gestures, this is the worst. When the restaurant owner comes by the table to ask this question, he wants us to tell him that his joint is unrivaled. Sure it is. The chef is putting canned pate on the tournedos, the sommelier is into the cooking wine, and the carpet in the dining room hasn't been replaced since 1973. And we're supposed to tell him everything is all right?

(9.) Ban the banquette. What is this, the Last Supper? I hate sitting side-by-side with my friends (and their coats), all of us up against the sticky red Naugahyde cushion. Why is it that everybody hates the middle seat on an airplane but doesn't mind banquettes? (At least on airplanes, the sparkling water comes free.) By the way, I also don't like booths, either, but I know everybody else does.

(10.) Bring back the dress code. I'm tired of putting on a jacket to go out to dinner and finding myself surrounded by velour tracksuits. At the very least, announce your lack of standards with a sign: "We welcome slobs."

BONUS: 10 Reasons Why White Wine Is Better Than Red Wine

(1.) White wine does not stain clothing, which is important to those of us who dine with enthusiasm.

(2.) White wine does not cause debilitating headaches, whereas red wine contains chemicals identical to those hidden from United Nations inspectors.

(4.) No decanting required. Watching sommeliers light candles and stare at red wine sediment is like attending a bad séance.

(5.) White wine goes with cheese the way red wine only wishes it did.

(7.) Ever notice that the winos hanging around vacant lots strewn with broken bottles and dead cats are always drinking red wine?

(8.) Sure, red wine lowers cholesterol, but is that any way to decide on a beverage?

(10.) Red wine drinkers talk constantly about terroir and barnyard aromas. They're best brought to their senses by throwing a glass of cold white wine in their faces. 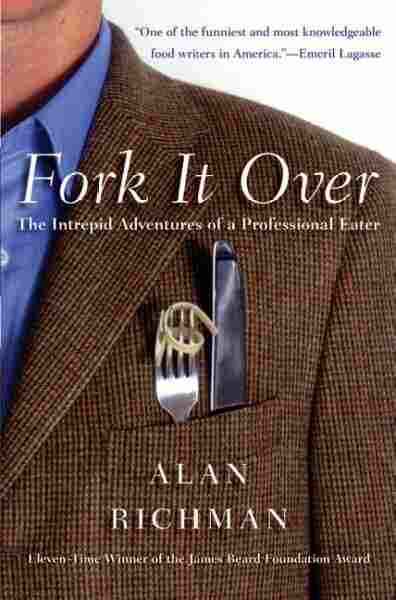 The Intrepid Adventures of a Professional Eater