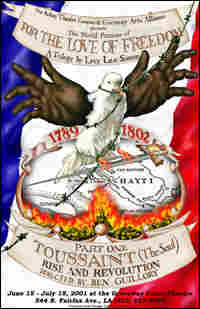 A poster for 'Toussaint, the Soul: Rise and Revolution,' the first part of Levy Lee Simon's trilogy on the Haitian revolution. hide caption

The Robey Theatre Company in Sherman Oaks, Calif., has mounted For the Love of Freedom, Levy Lee Simon's trilogy about Haiti's slave revolt -- which rocked Napoleon's France -- and its historical aftermath. The Tavis Smiley Show offers a condensed version of the epic production.

Scenes from the Trilogy

From 'Rise and Revolution'

A Note from Levy Lee Simon

From 'Blood and Liberation'

In the early eighties while still an undergraduate at Cheyney State College in Pennsylvania, my girlfriend at the time brought tickets for us to see For Colored Girls Who Have Considered Suicide When the Rainbow is Enuf on Broadway. I was just becoming interested in the theatre and the ticket was a birthday gift; and what a gift! In the play, the Lady in Red performed a piece about Toussaint Louverture. There I was an African American college student and I didn't know anything about Toussaint Louverture! I realized that African history in the world was hidden from us and I began to understand the reasons why. I promised myself from that point on to be responsible for my own education when it came to my history.

From 'Passion and Glory'

As the years passed, I learned a lot more, not only about Toussaint, but Jean Jacques Dessalines, Henri' Christophe, the entire Haitian Revolution and independence. It was empowering and liberating because these were not happy go lucky Negroes singing and dancing in the cotton fields as is so stereotypically depicted. These men not only liberated themselves, but an entire country from bondage, while under the rule of the greatest military genius of the time, Napoleon Bonaparte. And then established Haiti a world power. Since that time there has not been one Black ruled world power. In my mind, this made Toussaint and the others the "baddest dudes" that ever walked the face of the earth. And, if Napoleon is recognized as one of the greatest figures in world history then, why shouldn’t the greatness of Toussaint Louverture be recognized as well?

After many years of acting on the professional stage, reading plays and scripts of various genres, styles, historical movements etc., I realized how consistently the many stories of the African continuum were not told. And that in denying these stories, part of the essence and the spirit of African people was missing. That missing link holds elements of the truth that are not only liberating to people of African descent, but to all people. To understand the nature of cruelty, human suffering, and struggle is one aspect, but to understand the fight, the triumphs and glory that has been denied us is another. Respect to that fire which lies in the hearts of humanitarians is a human responsibility that crosses all lines of race and, can liberate us from prejudices and hatreds because it destroys lies and dismisses stereotypes giving us a clearer perspective of the world, the way it was and the way it is now. Therein lies the birth of FOR THE LOVE OF FREEDOM.