Accessibility links
Q&A: What the Fall of the Dollar Really Means Most of us know that when the value of the dollar falls, we end up paying more for imported goods. But how else does this affect the U.S. economy? We turned to Mark Zandi, chief economist for the consulting firm Economy.com, for a primer on what the dollar's fall really means.

Q&A: What the Fall of the Dollar Really Means

Q&A: What the Fall of the Dollar Really Means 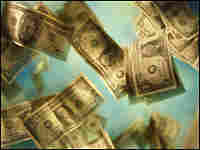 Economist Mark Zandi says he expects the dollar to continue depreciating over the next few years, but he does not think it will collapse. Don Mason/Corbis hide caption

For the seventh time in a month, the U.S. dollar hit a record low against the euro Wednesday, falling to $1.3160 from $1.3086 late Tuesday. In recent months, the U.S. dollar has also lost ground to the yen and the Canadian dollar.

Most of us know that when the value of the dollar falls, we end up paying more for imported goods. But how else does this affect the U.S. economy? We turned to Mark Zandi, chief economist for the consulting firm Economy.com, for a primer on what the dollar's fall really means.

Q: Why do we want foreign investment in the U.S. dollar?

When we say that foreigners invest in the dollar, we mean they are buying U.S. Treasury securities, corporate stocks and bonds, mortgage-backed bonds -- everything for sale on U.S. markets. Foreign investment helps fuel the growth of those markets.

In the 1990s, the bulk of foreign investment went into U.S. stocks and corporate acquisitions. Nowadays, most investment from abroad comes from central banks -- the central banks of China and Japan, in particular -- and most of that money is going into U.S. Treasury securities.

Investing in U.S. Treasury securities is less risky for central banks than putting their money in corporate stocks and bonds. Foreign central banks are also less inclined to take an ownership stake in U.S. companies, Zandi says, adding: "Can you imagine if the Chinese central bank owned a big chunk of GM?"

Q: What does the U.S. Treasury do with foreign investment?

The U.S. Treasury uses investment from abroad to finance the federal deficit -- which, in the fiscal year ending Sept. 30, was $413 billion. Much of that deficit is a result of the Bush administration's tax cuts, and spending associated with homeland security and U.S. military operations in Iraq and Afghanistan.

"In a very real way, foreign investment has been used to finance our national security activities abroad and at home," Zandi says.

Q: What happens if the dollar continues to slide?

Zandi says he expects the dollar to continue to depreciate over the next three or four years. "I don't think it will collapse, but it will deflate, particularly against the Chinese and other Asian currencies," he says. "They’ll be buying less of our assets, hopefully, and that means higher interest rates."

Q: You used the word "hopefully" to describe foreign investors' potential loss of interest in U.S. assets. Is the dollar's slide a good thing?

The dollar's fall will result in painful adjustments for the U.S. economy, but "ultimately, it's the right thing, and we'll be better for it," Zandi says.

So far, foreign investors have been willing to finance U.S. borrowing. But foreign nations have a finite amount of excess savings to lend to U.S. borrowers. "We're very close to that end now," Zandi says.

Some economists estimate that the United States is already borrowing about three-quarters of foreign nation's excess savings.

"These are things that can't continue forever," Zandi says. "We need to save more, and the only way it's going to happen is if we're forced to do it."

Meanwhile, the depreciation of the dollar will force U.S. consumers and the U.S. government to behave in a more responsible manner, to consume less aggressively and produce more goods, Zandi predicts. In the end, the dollar's fall will make it cheaper for foreign consumers to buy U.S. goods -- a positive outcome we'll reach only after an arduous period of correction.

"The longer it takes for us to make that adjustment, the more painful it will be," he says. "If we take our medicine now, we won't need to take as much in the future."

Q: Will the fall of the dollar send investors fleeing?

There is an upside to the fact that so much of the money the U.S. Treasury borrows comes from the central banks of China and other Asian nations, Zandi notes: These investors can't pull their money out all at once without significantly affecting the value of what's left of their investment. That's likely to keep investor flight from getting too out of hand, he says.

"We're not going to lose the money," Zandi says. "We'll just have to pay more to get it."

Q: You've said the dollar's depreciation will spur a rise in interest rates. Does this pose a danger to America's economic recovery?

As the dollar depreciates, foreign investors will want higher returns for their money to compensate for the increased risk. That means U.S. individuals, corporations and the federal government will have to pay more for the money they borrow.

Zandi expects interest rates to rise in a measured, modest way. But he says how fast and how high rates rise depends on how quickly we can move from being big consumers to "balanced consumers." "The longer the process takes to begin, the more painful it will be," he says.

We're likely to see inflation, though how fast it surges depends on how quickly we can get U.S. borrowing under control, he says.

Higher interest rates will weaken housing market significantly, he says, noting prices in certain "bubble" markets -- such as in D.C., Florida and California -- are likely to fall or stay flat.

He also expects a significant slowdown in auto sales, which have been fueled by generous financing offers from automakers.

Q: Does the dollar's fall signal a shift in global economic power?

"I don't think our problems are with Europe," Zandi says. "The dollar's slide against the euro goes back to China."

Zandi says as the dollar weakens, China's central bank has sought to diversify its assets. "They are taking the dollars they get in trade, and instead of buying more U.S. Treasury bonds, they re buying euros, Canadian dollars and British pounds."