Accessibility links
Diana Krall, Singing Her Own Song Diana Krall is known for her interpretations of old favorites from the American songbook. But her latest release, The Girl in the Other Room, includes newer songs and — for the first time — her own music. She talks about her craft with NPR's Steve Inskeep.

The Canadian-born artist good-naturedly plays a tune she wrote for a Chivas Regal ad much earlier in her career. 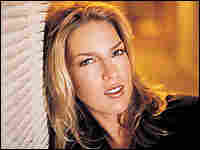 After a decade of success doing cover tunes, Diana Krall is now performing her own material. Colin Bell/dianakrall.com hide caption

But now she's writing her own tunes, in an evolution unpopular with some of her fans and some critics, as well.

She says it began with a series of e-mails to Elvis Costello. She met the multi-dimensional musician at the Grammy Awards in February 2002. He became her husband.

"We started talking about music and writing," Krall told NPR's Steve Inskeep during a recent performance chat. "He encouraged me."

"I met the right collaborator," she says. "We weren't trying to rewrite Cole Porter or George Gershwin. I wanted to write something that was more confidential."

What emerged was The Girl in the Other Room -- Krall's debut as a songwriter.