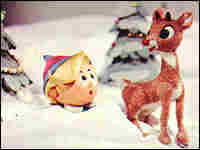 Another setback for the misfits: Hermey the elf, left, with Rudolph. Rick Goldschmidt/Sony hide caption 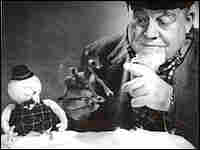 The story of Rudolph, the outcast red-nosed reindeer who went on to save Christmas for generations of children, will be broadcast on its 40th anniversary Wednesday.

Author Rick Goldschmidt has been involved in the Rudolph story for years, from helping to assemble a DVD of the special to writing a book on the making of the children's favorite. Goldschmidt talks with NPR's Steve Inskeep about the show's longevity -- and the scenes that didn't make it to air.

Legendary folk singer Burl Ives was the voice behind Sam the Snowman. He narrated the story of Rudolph and his best friend Hermey, an elf who wanted to be a dentist after years of toiling in Santa's workshop.

But when NBC was putting together a cast of stop-motion puppets for Rudolph in 1964, Sam -- and Ives -- were late additions, barely edging out the character of a singing prospector, Yukon Cornelius.

Goldschmidt says that, from the Cornelius switch to the cutting of songs and whole scenes, the story behind this much-loved classic is almost as good as the show itself.

The World of Rankin Bass