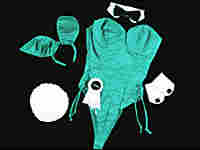 A vintage Playboy Bunny costume from the 1960s is among the many items up for sale in Chicago's fire sale on eBay. hide caption 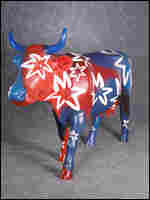 Also up for auction: a Moollennium cow from the city's 1999 Cows on Parade display. hide caption

Pieces of Chicago's history and cultural experiences go up for bidding in a two-week auction beginning Thursday. The sale is an attempt to raise money for city arts and cultural programs, while also raising its profile.

The "Great Chicago Fire Sale" is the first charitable eBay auction to be held by a municipality, and is being run by Chicago's Department of Cultural Affairs.

Offerings include a dinner party prepared by Oprah Winfrey's chef, a chance to dye the river green on St. Patrick's Day, a cow statue from the city's 1999 Cows on Parade display and an authentic Playboy Bunny costume from the 1960s. NPR's David Schaper reports.