Accessibility links
Gooey-Good Sandwiches to Melt in Your Mouth A new cookbook from food writer Marlena Spieler gives a makeover to the ultimate comfort food. With combinations like mozzarella, fig jam and prosciutto, and sage sausage with jack, Grilled Cheese: 50 Recipes to Make You Melt makes the classic sandwich even better. NPR's Jennifer Ludden joins Spieler in the kitchen.

Listen
Gooey-Good Sandwiches to Melt in Your Mouth 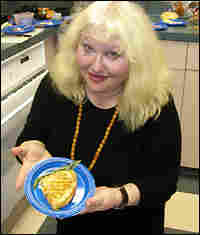 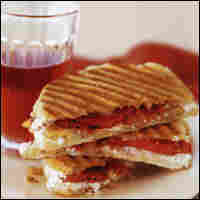 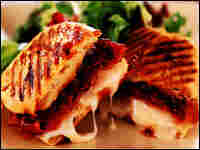 A new cookbook from food writer Marlena Spieler gives a makeover to the ultimate comfort food. Plain toasted cheese on bread just won't cut it in Grilled Cheese: 50 Recipes to Make You Melt. Spieler offers lively new combinations, including mozzarella, fig jam and prosciutto; gorgonzola and apple; and sage sausage with jack. She joins NPR's Jennifer Ludden in the NPR kitchen to prepare some of the recipes.

The streets of Paris are full of panini sellers offering up their delectable Franco-Italian sandwiches: Italian technique and spirit, luscious French cheese such as local goat cheese… spiked with accents of olives, walnuts, tomatoes, or herbs. Buy one and eat it as you stroll the Marais, or go into the kitchen, put an Accordions of Paris CD on the player, and make yourself a goat cheese panino this instant!

If you have a panini press, as well as the soft smallish rolls – called, predictably, panini (i.e. "little breads") – that flatten out so perfectly into the distinctive Italian street sandwich, you will have a more authentic goodie. But if you don't, not a problem. Use a soft rather than crusty roll, as small as you can find, and remove about half of its bready filling. If you can't find a roll like this, use a pita bread instead. And I always think a nice panino is good with a bowl of Tomato Soup.

4 soft rolls, opened up and about half the bready interior pulled out

1. Lay out the rolls and fill each one with 1 ½ to 2 ounces cheese, and one of the A, B, or C fillings. Close up and press together to seal well.

2. Heat a panini press and add the sandwiches, pressing as per directions or heat a heavy nonstick skillet over medium-high heat. Brush eadh sandwich lightly with olive oil, then add to the pan. Heat through, turning once or twice, until lightly crisped on the outsideand the cheese is melted within.

3. Serve at once, cut into halves.

This simple sandwich makes you remember why you loved grilled cheese so much as a kid: it's crisp, rich, zesty, and comforting. The enticing aroma of garlic and rosemary helps you remember you're not a kid anymore.

8 ounces Jarlsberg or a mild melting cheese such as Jack

1. Arrange 4 slices of bread on a work surface and top with the cheese, then add the red peppers, garlic, and rosemary. Top with the remaining slices of bread and press together gently. Brush the outside of each sandwich lightly with the oil.

2. Heat a heavy nonstick skillet or sandwich press over medium-high heat and add the sandwiches, working in several batches if need be. Lower the heat to medium-low, browning the sandwiches slowly (press with the spatula to help crisp), until lightly crisped on the outside and the cheese begins to melt. Turn over and repeat on second side.

3. Serve each sandwich cut into halves or quarters.

Fresh milky mozzarella melts into a puddle of soothing, stringy cheese, with a hit of salty prosciutto, and a smudge of sweet fig jam to balance it all. For lunch, Spring Mix with Herbs is nice alongside.

Fig jam and preserved figs, usually imported from Italy, Greece, or Turkey, are sometimes found in specialty shops and on Web sites as well as some supermarkets. If unavailable, use sliced fresh figs, drizzled with a tiny bit of honey.

Soft butter for spreading on bread

1. Split each roll, and layer with the mozzarella and prosciutto. Spread the top slices with the fig jam, then close up.

2. Lightly butter the outside of each sandwich.

3. Heat a heavy nonstick skillet or panini press over medium-high heat. Place the sandwiches in the pan, working in two batches depending on the size of the pan. Press the sandwiches or close the grill and brown, turning once or twice, until the bread is crisp and the cheese has melted. Though the rolls start off as round, once pressed they are considerably flatter and can be easily truned, albeit carefully.

4. Serve right away, cut on the diagonal.

Cheese on the Web 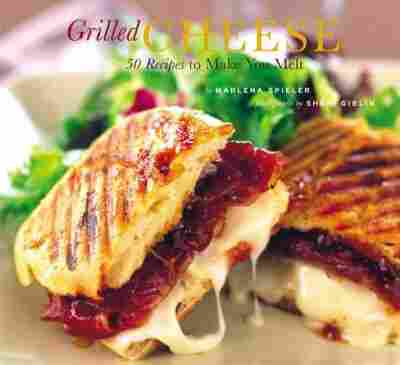 50 Recipes to Make You Melt

by Marlene Spieler and Sheri Giblin