Accessibility links
Young Photographers from the Streets of Calcutta Born into Brothels, a new documentary film, tells the story of children growing up in poverty in Calcutta's red-light district who find hope in a newfound skill -- photography. NPR's Melissa Block talks with filmmaker Zana Briski.

Listen
Young Photographers from the Streets of Calcutta 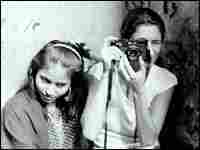 Photographer Zana Briski, right, has conducted a series of photographic workshops with children of prostitutes in Calcutta. Kids with Cameras hide caption

Born into Brothels, a new film documentary, tells the story of children growing up in poverty in Calcutta's red-light district who find hope in a newfound skill -- photography. NPR's Melissa Block talks with photographer and filmmaker Zana Briski, who got to know the children and taught them how to use a camera to tell their own stories. 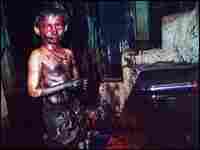 This photo, titled 'Babai,' is by Kochi, age 10. Kids with Cameras hide caption

Briski formed Kids with Cameras, a non-profit organization to help educate the children of Calcutta's brothels, and to empower other marginalized children around the world through photography.

In the following passage from Born into Brothels, the book accompanying the film, Briski describes how the project came about.

Zana Briski: Behind the Project

In 1998 I began living with prostitutes in a squalid red light district of Calcutta.

When I first went to India in 1995, I had no idea what lay ahead. I began to travel and photograph the harsh realities of women's lives ­-- female infanticide, child marriage, dowry deaths and widowhood.

I had no intention of photographing prostitutes until a friend took me to the red light district in Calcutta. From the moment I stepped foot inside that maze of alleyways, I knew that this was the reason I had come to India.

I spent months trying to gain access to this impenetrable place. I knew I wanted to live with the women, to really understand their lives. Finally a brothel owner gave me a room. It took a long time before I gained the trust of the women. As they waited for clients, I waited with them. I sat for hours on end, joking, playing, experiencing the tediousness and the volatile emotions that erupt where women find themselves trapped in an inescapable world, forced to sell affection in order to live and care for their children.

It was the children who accepted me immediately. They didn't quite understand what I was doing there, but they were fascinated by me and my camera. I let them use it and showed them how to take pictures. I thought it would be great to see this world through their eyes. It was then that I decided to teach them photography.

On my next trip I brought ten point-and-shoot cameras and selected a group of kids who were most eager to learn. I had no idea what I was doing, but the kids loved it and turned up to class every week. And the results were amazing. I gave up my own photography and began to work with the kids full time. I knew that there was something important to document here so I bought a video camera and began to film the kids in the brothels, in the streets and on photo class trips. I had never even picked up a video camera before.

I invited Ross Kauffman to Calcutta to come and make a film with me. He didn't want to come, so I sent him some of the tapes to look at, knowing that he would fall in love with the kids, as I had done. Soon after he was on a plane for Calcutta. He was worried about the story. I told him to wait. The story would reveal itself.