Accessibility links
After Rutles, Monty Python, Innes Still Sings Neil Innes is a singer and songwriter who also was the guiding musical force behind the comedy team Monty Python. His humorous songs carry that peculiar British blend of absurdity and intelligence. Music journalist Ashley Kahn caught up with Innes on his recent American tour.

'How Sweet to Be an Idiot' 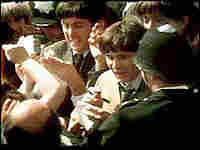 Eric Idle, left, with Innes in a staged autograph signing for The Rutles. neilinnes.org hide caption

Singer and songwriter Neil Innes may be best known for his years with Monty Python. But he still writes and performs songs in his inimitable style, a peculiarly British blend of absurdity and intelligence. Music journalist Ashley Kahn caught up with Innes during his recent American tour. 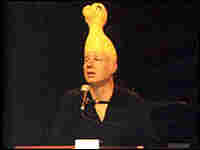 Innes first appeared on the scene in the 1960s, in the outlandish Bonzo Dog Doo-Dah Band. Even the Beatles became fans of the group. The Bonzos appeared in the Magical Mystery Tour movie, and Paul McCartney produced their only top 10 hit, "I'm the Urban Spaceman."

Soon after, Innes was recruited by a group of comedy writers that included Eric Idle, Michael Palin and John Cleese, who were starting a television program that became Monty Python's Flying Circus.

Flying Circus featured several Innes songs, from "Lumberjack Song" to "Brave Sir Robin" and more. Innes appeared in a few sketches, going on to play a factually accurate minstrel in the 1975 film Monty Python and The Holy Grail.

When Monty Python disbanded in 1978, Idle approached Innes about forming a band that would satirize the best-known rock group of all time. The resulting group, The Rutles, created a mockumentary that chronicled the rise and fall of a Beatle-like foursome.

Innes is about to turn 60. Once in a while, he still brings his one-man show to the United States, performing songs from his long career in music and comedy. But these days his songs are a little less absurd and lean more towards biting social commentary.

With irony and wit, Innes has become the folksinger with a cause -- even if he sometimes parodies the cause itself.