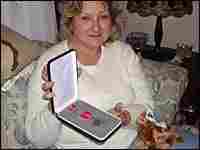 Linda Faulstitch of Leonardtown, Md., holds combat medals awarded to her son, Army Spc. Ray Faulstitch Jr., who was killed in Iraq on Aug. 5. On her lap is a stuffed camel that belonged to Ray. Eric Niiler for NPR hide caption