Songs in the Story

With equal parts jazz and folk, Marta Gomez's music encompasses the varied rhythms of Latin America. But her songs also comment on many social issues, touching on Colombia, Argentina, Cuba and Spain. 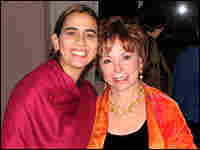 Gomez with Chilean writer Isabel Allende in November. The song "Paula Ausente" is dedicated to Allende and her daughter Paula. martagomez.com hide caption

Among Gomez's influences is the Chilean novelist and journalist Isabel Allende, whose work, such as the novel House of the Spirits, incorporates social themes into personal stories.

NPR's Steve Inskeep talks with Gomez about the songs -- and politics -- on her new CD, Cantos de Agua Dulce (Songs of Sweet Water). The release has been hailed as a smart update of folk traditions.