Accessibility links
Kerik Bows Out as Nominee Bernard Kerik, the former New York City police commissioner tapped by President Bush to succeed Tom Ridge as chief of homeland security, withdraws from consideration for the post. Kerik cited concerns over the immigration status of a nanny in his employ. 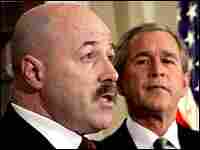 WASHINGTON (AP) -- In a surprise move, former New York Police Commissioner Bernard Kerik abruptly withdrew his nomination as President Bush's choice to be homeland security secretary Friday night, saying questions have arisen about the immigration status of a housekeeper and nanny he employed.

The decision caught the White House off guard and sent Bush in search of a new candidate to run the sprawling bureaucracy of more than 180,000 employees melded together from 22 disparate federal agencies in 2003.

Kerik informed Bush of his decision to withdraw in a telephone call at 8:30 p.m. EST. "I am convinced that, for personal reasons, moving forward would not be in the best interests of your administration, the Department of Homeland Security or the American people," Kerik said in a letter to the president.

Kerik is not the first prominent official to fall victim to the "nanny problem." Similar issues killed the nomination hopes of three candidates for top administration posts in the Clinton administration.

One administration official helping prepare Kerik for Senate confirmation, speaking on condition of anonymity, said Kerik's unexpected decision shocked senior leaders at the Homeland Security Department. This official said Kerik still had not filled out all his ethics filings — which would detail his sources of income and financial liabilities — and said the FBI background investigation of Kerik was still incomplete.

But the only moderately troubling information uncovered about Kerik so far was news that Kerik had earned $6.2 million by exercising stock options he received from Taser International, which did lucrative business with the Department of Homeland Security, this official said.

The White House had defended him against questions of conflict of interest involving his relationship with Taser. "We have full confidence in his integrity and we are confident that he will take the appropriate steps necessary to make sure that there are no conflicts there," White House press secretary Scott McClellan had said at his midday briefing.

Kerik said the problematic issue arose as he was completing documents required for Senate confirmation. "I uncovered information that now leads me to question the immigration status of a person who had been in my employ as a housekeeper and nanny. It has also been brought to my attention that for a period of time during such employment required tax payments and related filings had not been made."

Kerik said he feared that the disclosure of the issue would generate intense scrutiny that would "only serve as a significant and unnecessary distraction to the vital efforts of the Department of Homeland Security."

Copyright 2004 by The Associated Press. All Rights Reserved.