Accessibility links
Europe, Islam's New Front Line The debate on whether Muslims can adapt to living as a minority in secular societies is surrounded by tension and confusion. NPR's Sylvia Poggioli concludes a five-part series on Muslims in Europe. 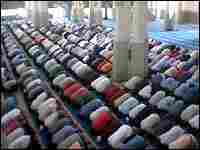 Throughout the continent, a debate rages on how to integrate rapidly growing Muslim minorities -- many of whom feel contempt and hatred for their host societies. NPR's Sylvia Poggioli concludes a five-part series on Muslims in Europe.

I think secularism has gone mad. The separation of church and state has gone to that extent that even the believers are not finding any space in the society where they live. Let us create a modern Islamic state; then you will see where fairness and justice prevail.