Accessibility links
Oscar Brown: 'Bid 'Em In' Oscar Brown Jr. travels the United States to tell stories of African-American history. His song "Bid 'Em In" — in which he plays the part of a slave auctioneer — prompted an animated short film now eligible for an Oscar. Hear Brown and NPR's Tavis Smiley.

Only Available in Archive Formats.
Oscar Brown: 'Bid 'Em In' 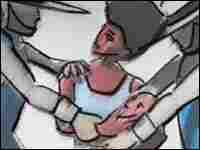 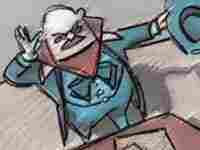 The auctioneer from Bid 'Em In Neal Sopata hide caption

Oscar Brown Jr. is a true American griot -- in the West African tradition, a storyteller who carries on the oral traditions of a family or village.

Brown is a poet, playwright, singer, actor and humorist who travels the United States, telling stories of African-American history. Over the decades, some of his songs have become classics. He's also known for combining his community activism with the arts, and once organized Chicago gang members into a theatre troupe.

Now 79, his song "Bid 'Em In" -- a harrowing, percussive narrative where Brown plays the part of a slave auctioneer -- has become an animated short film directed by Neal Sopata and produced by Ayappa Biddanda. Brown talks with NPR's Tavis Smiley about the film, which is eligible for an Academy Award in the Best Short (Animation) category.