Director John Waters, known for making art from sleaze, has a new CD for the season, A John Waters Christmas. It includes such songs as "Here Comes Fatty Claus," "Little Mary Christmas," and "Santa Claus is a Black Man." Waters was once crowned the "Pope of Trash" by William Burroughs. 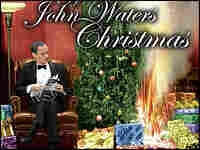 Waters' 1988 film Hairspray was made into a Tony Award-winning Broadway musical. In addition, Waters started photographing video stills off his television screen that became the raw material for his artwork. Many of the images are collected in his recent book, John Waters: Change of Life.