Accessibility links
Expert Advice for Last-Minute Baking With guidance from his mother and grandmother, chef Alton Brown developed an flair in the kitchen early. In the final installment of our holiday baking series, he offers some last-minute tips. And NPR's Jennifer Ludden gets some kitchen wisdom from her own grandmother, Marion Otte. 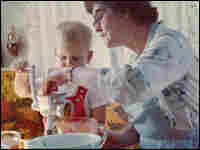 A young Alton Brown cooking with his grandmother. hide caption 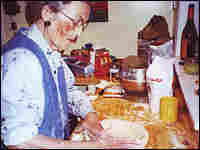 With guidance from his mother and grandmother, chef, author and Good Eats host Alton Brown developed a flair in the kitchen early. In his new book I'm Just Here for More Food, he cites his grandmother's biscuits – "little knobs of goodness" -- as his "own personal onramp to the craft of baking."

For the final installment of our holiday baking series, Brown offers advice on last-minute desserts for family gatherings. And NPR's Jennifer Ludden gets some kitchen wisdom from her own grandmother, Marion Otte.

Although I always recommend using the best chocolate you can get your hands on, I usually make this mousse with those little bitty bars of Hershey's Special Dark that you're always left with after Halloween. It takes 40 of the little guys. By the way, the stubby French painter Toulouse-Lautrec supposedly invented chocolate mousse – I find that rather hard to believe, but there you have it.

Pour 1 ½ cups of the cream into a large metal mixing bowl and stash it in the freezer.

Place the chocolate, butter, and liqueur in another large metal bowl and melt over a pot of barely simmering water (filled about 1 inch high), stirring constantly.

Remove from the heat while a couple of chunks are still visible. For the next 5 minutes continue to stir occasionally, until the mixture cools to just above body temperature. Set aside.

Place the remaining ¼ cup of the cream in a small saucepan or large metal measuring cup and sprinkle the gelatin over it. Allow the gelatin to bloom for 10 minutes, then dissolve the gelatin by carefully heating and swirling the pan over low heat. Whatever you do, don't let the cream boil or the gelatin's setting power will be greatly reduced.

Stir the mixture into the cooled chocolate and set aside.

Remove the cream from the freezer and use an electric hand mixer to beat the cream to medium peaks.

Cover the bowl with plastic wrap or spoon the mousse into individual dessert dishes (martini glasses work very nicely for this), cover the dishes, and refrigerate for at least 2 hours.

Garnish with fruit – or not – and serve.

Take the eggs out of the fridge at least two hours before baking.

Separate the egg yolks from the egg whites very carefully, because if you get any yolk in the egg whites, they won't fluff up enough to make the meringue.

Put the three egg whites into the beater with the 1/4 teaspoon of cream of tartar.

Beat the eggs while adding a tablespoon of sugar at a time until the eggs stiffen and peak.

When baking the lemon pie you also have to make sure your eggs are warm.

Separate out the egg yolks and beat them well.

Mix the sugar, corn starch, and water together, and put it on the stove to cook until it's almost thick.

After you add the egg yolks, let it all cook for another couple of minutes until it is all one consistency.

Then dump the butter, grated lemon rind, and lemon juice into the pudding. When it's all stirred up it is ready to pour into your pie crust.

Once you pour the lemon pudding into your pie crust and put the meringue on top, its ready to be put in the oven at 350 degrees to bake for about fifteen minutes.

Alton Brown on the Web 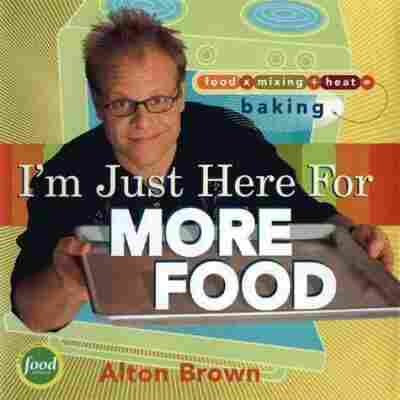