Accessibility links
The Real Lemony Snicket Lemony Snicket, a.k.a. Daniel Handler, gained a dedicated following of young readers with his darkly funny A Series of Unfortunate Events books. Now the Baudelaire orphans have made the big screen. Handler tells NPR's Michele Norris about his own childhood fears and adult apprehensions. 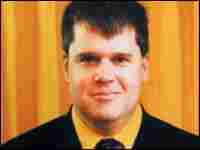 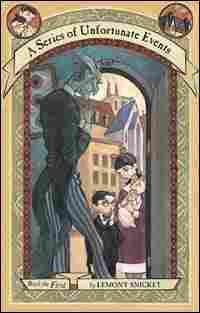 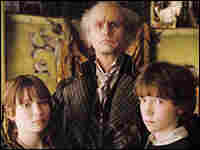 Lemony Snicket, a.k.a. Daniel Handler, gained a dedicated following of young readers with his darkly funny A Series of Unfortunate Events books, which never end happily. The unlucky Baudelaire orphans arrive on the big screen in a film version of the saga premiering this weekend.

In an interview with NPR's Michele Norris, Handler talks about his childhood fears and adult apprehensions.

Handler says comparisons between Unfortunate Events and the Dr. Seuss classic A Cat in the Hat are valid. "There's that same dark energy behind the story, that once your parents are removed from the picture... the chaos of the world of the world can begin to filter in," he says.

Below is an excerpt from A Series of Unfortunate Events #1: The Bad Beginning by Lemony Snicket and Brett Helquist.

If you are interested in stories with happy endings, you would be better off reading some other book. In this book, not only is there no happy ending, there is no happy beginning and very few happy things in the middle. This is because not very many happy things happened in the lives of the three Baudelaire youngsters. Violet, Klaus, and Sunny Baudelaire were intelligent children, and they were charming, and resourceful, and had pleasant facial features, but they were extremely unlucky, and most everything that happened to them was rife with misfortune, misery, and despair. I'm sorry to tell you this, but that is how the story goes.

Their misfortune began one day at Briny Beach. The three Baudelaire children lived with their parents in an enormous mansion at the heart of a dirty and busy city, and occasionally their parents gave them permission to take a rickety trolley-the word "rickety," you probably know, here means "unsteady" or "likely to collapse"-alone to the seashore, where they would spend the day as a sort of vacation as long as they were home for dinner. This particular morning it was gray and cloudy, which didn't bother the Baudelaire youngsters one bit. When it was hot and sunny, Briny Beach was crowded with tourists and it was impossible to find a good place to lay one's blanket. On gray and cloudy days, the Baudelaires had the beach to themselves to do what they liked.

Violet Baudelaire, the eldest, liked to skip rocks. Like most fourteen-year-olds, she was right-handed, so the rocks skipped farther across the murky water when Violet used her right hand than when she used her left. As she skipped rocks, she was looking out at the horizon and thinking about an invention she wanted to build. Anyone who knew Violet well could tell she was thinking hard, because her long hair was tied up in a ribbon to keep it out of her eyes. Violet had a real knack for inventing and building strange devices, so her brain was often filled with images of pulleys, levers, and gears, and she never wanted to be distracted by something as trivial as her hair. This morning she was thinking about how to construct a device that could retrieve a rock after you had skipped it into the ocean.

Klaus Baudelaire, the middle child, and the only boy, liked to examine creatures in tidepools. Klaus was a little older than twelve and wore glasses, which made him look intelligent. He was intelligent. The Baudelaire parents had an enormous library in their mansion, a room filled with thousands of books on nearly every subject. Being only twelve, Klaus of course had not read all of the books in the Baudelaire library, but he had read a great many of them and had retained a lot of the information from his readings. He knew how to tell an alligator from a crocodile. He knew who killed Julius Caesar. And he knew much about the tiny, slimy animals found at Briny Beach, which he was examining now.

Sunny Baudelaire, the youngest, liked to bite things. She was an infant, and very small for her age, scarcely larger than a boot. What she lacked in size, however, she made up for with the size and sharpness of her four teeth. Sunny was at an age where one mostly speaks in a series of unintelligible shrieks. Except when she used the few actual words in her vocabulary, like "bottle," "mommy," and "bite," most people had trouble understanding what it was that Sunny was saying. For instance, this morning she was saying "Gack!" over and over, which probably meant, "Look at that mysterious figure emerging from the fog!"

Sure enough, in the distance along the misty shore of Briny Beach there could be seen a tall figure striding toward the Baudelaire children. Sunny had already been staring and shrieking at the figure for some time when Klaus looked up from the spiny crab he was examining, and saw it too. He reached over and touched Violet's arm, bringing her out of her inventing thoughts.

"Look at that," Klaus said, and pointed toward the figure. It was drawing closer, and the children could see a few details. It was about the size of an adult, except its head was tall, and rather square.

"What do you think it is?" Violet asked.

"I don't know," Klaus said, squinting at it, "but it seems to be moving right toward us."

"We're alone on the beach," Violet said, a little nervously. "There's nobody else it could be moving toward." She felt the slender, smooth stone in her left hand, which she had been about to try to skip as far as she could. She had a sudden thought to throw it at the figure, because it seemed so frightening.

"It only seems scary," Klaus said, as if reading his sister's thoughts, "because of all the mist."

This was true. As the figure reached them, the children saw with relief that it was not anybody frightening at all, but somebody they knew: Mr. Poe. Mr. Poe was a friend of Mr. and Mrs. Baudelaire's whom the children had met many times at dinner parties. One of the things Violet, Klaus, and Sunny really liked about their parents was that they didn't send their children away when they had company over, but allowed them to join the adults at the dinner table and participate in the conversation as long as they helped clear the table. The children remembered Mr. Poe because he always had a cold and was constantly excusing himself from the table to have a fit of coughing in the next room.

Mr. Poe took off his top hat, which had made his head look large and square in the fog, and stood for a moment, coughing loudly into a white handkerchief. Violet and Klaus moved forward to shake his hand and say how do you do.

"Fine, thank you," said Mr. Poe, but he looked very sad. For a few seconds nobody said anything, and the children wondered what Mr. Poe was doing there at Briny Beach, when he should have been at the bank in the city, where he worked. He was not dressed for the beach.

"It's a nice day," Violet said finally, making conversation. Sunny made a noise that sounded like an angry bird, and Klaus picked her up and held her.

"Yes, it is a nice day," Mr. Poe said absently, staring out at the empty beach. "I'm afraid I have some very bad news for you children."

The three Baudelaire siblings looked at him. Violet, with some embarrassment, felt the stone in her left hand and was glad she had not thrown it at Mr. Poe.

"Your parents," Mr. Poe said, "have perished in a terrible fire."

The children didn't say anything.

"They perished," Mr. Poe said, "in a fire which destroyed the entire house. I'm very, very sorry to tell you this, my dears."

Violet took her eyes off Mr. Poe and stared out at the ocean. Mr. Poe had never called the Baudelaire children "my dears" before. She understood the words he was saying but thought he must be joking, playing a terrible joke on her and her brother and sister.

"The fire department arrived, of course," Mr. Poe said, "but they were too late. The entire house was engulfed in fire. It burned to the ground."

Klaus pictured all the books in the library, going up in flames. Now he'd never read all of them. Mr. Poe coughed several times into his handkerchief before continuing. "I was sent to retrieve you here, and to take you to my home, where you'll stay for some time while we figure things out. I am the executor of your parents' estate. That means I will be handling their enormous fortune and figuring out where you children will go. When Violet comes of age, the fortune will be yours, but the bank will take charge of it until you are old enough."

From A Series of Unfortunate Events #1: The Bad Beginning. Copyright 1999 by Lemony Snicket. HarperCollins Publishers.

More About the Lemony Snicket Books 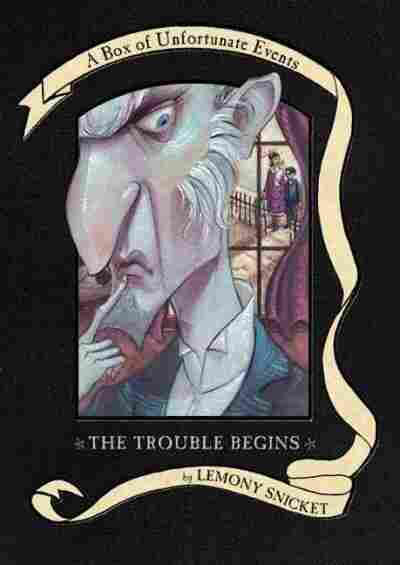 The Bad Beginning, the Reptile Room, & the Wide Window 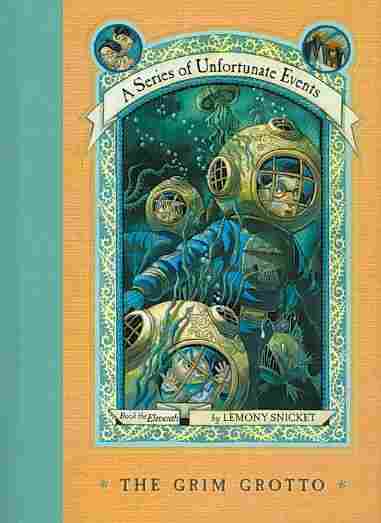