Accessibility links
A History of Gospel Music The roots of gospel music are not well-documented. Early recordings were lost. Stories behind the songs weren't written down. A new book recounts the history of the beloved American art form. NPR's Michele Norris talks with Robert Darden, author of People Get Ready!.

Listen
A History of Gospel Music 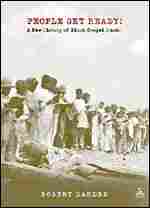 Hear samples of selected music featured in this story:

Move on Up a Little Higher

Rough Side of the Mountain

The roots of gospel music are not well documented. Early recordings were lost. Stories behind the songs weren't written down. A new book recounts the history of the beloved American art form. 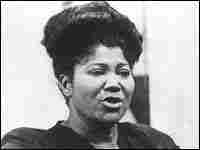 NPR's Michele Norris discusses the rich history of gospel and spirituals with Robert Darden, author of People Get Ready.

Mahalia Jackson, like Thomas Dorsey, arrived at a particular point in time, a point where -- in retrospect -- it is always easy to identify the intersection of demand and talent. It's possible that Mahalia's gift was such that had she arrived earlier or later she still would have had an overpowering impact. In writing about Frank Sinatra, musicologist Henry Pleasants says that he was "neither pioneer nor radical." Instead, he claims Sinatra was "simply a musical genius who arrived at a moment predestined for that genius." The parallel with Mahalia is unmistakable. Hindsight indicates that where the demand for this kind of music meets this kind of talent, something lasting always occurs:

"And with the changing music came a new style of performance, a style that emphasized movement and improvisation, a style that demanded emotional involvement and personalized expression. Dorsey's model singers -- those who initially presented the songs and then coached the young choruses -- all came straight out of the sanctified church. Sallie Martin, Mahalia Jackson and Willie Mae Ford Smith all believed in letting the Holy Ghost have Its way; each of them made this belief performatively obvious in her singing. The new choruses, under these vocalists' careful tutelage, thus learned more than just new tunes. They also received training in the freedom and faith of singing in the Spirit."

Especially in the African American Holiness churches, "experience pervades all description of worship and performance." Each service, each song, is designed to invite the presence of the Holy Spirit, the third member of the Protestant church's "Holy Trinity." What Jackson was apparently able to do better than virtually all singers before or after her, according to numerous eyewitness accounts, was take listeners to a place where they could feel the "touch" of the Holy Spirit. This is an experience, writes Hinson, that is best "described in metaphors of fire and mystery:"

"Transcending emotion, this spiritual 'anointing' is upheld as the pinnacle of human experience. Its advent - said to be facilitated by the mind-focusing power of praise and prayer, song and sermon - serves as the experiential leitmotif of religious expression in the sanctified church."

How Mahalia Jackson came to possess such a voice, one that so effortlessly brought about this "anointing," may ultimately be impossible to determine. Perhaps it was simply a gift, like the one bestowed on Mozart. Its origins - and its recipients' worthiness -- may vex the likes of a Salieri in Milo Forman's Amadeus, but it is readily apparent to all who hear it. In many African American churches, the absence or presence of such a gift is signaled by a series of responses from the congregation. According to a study by Mellonee Burnim, respondents repeatedly and consistently reported that for the Holy Spirit to be present, the singer is required to possess a voice that "must transmit intensity, fullness, and the sense that tremendous energy is being expelled." If this happens, the congregation will spontaneously respond with phrases such as:

"The girl needs to sit down and rest a while!"

"I guess after that song that's all you need to do."

This, of course, is exactly what happened in the numerous contemporary accounts of Mahalia Jackson performances. During a particularly emotional church service during this period, Laurraine Goreau records one overwhelmed congregant as shouting, "That woman sing too hard; she going to have TB!"

And thus, in the heart of the Depression, began the rise of one of America's greatest singers.

'People Get Ready! at Continuum Publishing