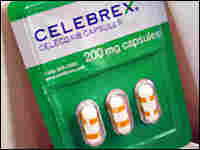 Pfizer has agreed to pull advertisements for its painkiller Celebrex. NPR hide caption

Research suggests several popular painkillers may increase the risk of heart attacks, strokes and other cardiovascular problems. These concerns prompted Merck to pull its blockbuster drug Vioxx off the market. Studies also have linked Celebrex and naproxen to heart risks.

Q: I heard that naproxen may increase the risk of a heart attack or stroke. Should I be worried if I've taken this drug?

A: Nobody can say for certain at this moment. The Food and Drug Administration says only that people who take naproxen (which is sold under several names, including Aleve) should follow the dosage directions on the bottle and should not take the drug for more than 10 days without consulting a physician.

Q: What are the risks of naproxen?

A: Preliminary data were announced on Dec. 20 suggesting that there is a small increased risk of heart attacks and strokes among people over 70 who take naproxen for long periods. The data have not been "adjudicated," so there is a chance that further study will show that there is no elevated risk.

Q: Why were researchers studying the safety of naproxen? It's been on the market for 30 years.

A: They weren't studying the safety. There have been suggestions that naproxen and other anti-inflammatory drugs might slow the progress of the Alzheimer's. When word came on Dec. 17 that Celebrex might increase the risk of heart attacks and strokes, researchers conducting other studies involving these drugs began looking more closely at the safety data in their own studies. In this case, the study was sponsored by the National Institute of Aging. NIA researchers would not release the exact numbers of heart attacks and deaths due to naproxen, saying that these would be published later.

Q: How do I know whether naproxen is safe?

A: The FDA has not made a final determination on the new data. On Dec. 23, the FDA issued new guidelines emphasizing that all over-the-counter pain medications, including nonsteroidal anti-inflammatories (NSAIDs) like naproxen, "should be used in strict accordance with the label directions. If use of an (OTC) NSAID is needed for longer than ten days, a physician should be consulted. Individual patient risk for cardiovascular events and other risks commonly associated with NSAIDs should be taken into account for each prescribing situation."

Q: How does Celebrex work?

A: Celebrex, Vioxx, Bextra and Mobic belong to a class of compounds called non-steroidal anti-inflammatories (NSAIDs). This group is large and also includes aspirin and over-the-counter medications like ibuprofen and naproxen.

That gives them a hypothetical advantage in protecting the gastrointestinal tract, since the COX-1 enzyme is believe to be needed to protect the lining of the gut --if it's blocked, bleeding and ulcers may occur.

The COX-2 inhibitors have been widely promoted as safer on the stomach and intestinal tract, and were widely adopted by patients seeking a gentler treatment for pain. As for the emerging data suggesting a link to heart disease, scientists think that interfering with COX-2 may change the stickiness of blood platelets in such a way that blood clots may form more readily if COX-2 has been blocked by Celebrex, Vioxx or other COX-2 inhibitors.

Q: What is known about the risks of Celebrex?

A: A study of Celebrex (known generically as celecoxib) found that people taking 400 mg twice a day had a 3.4 times greater risk of heart and blood vessel events than those taking a placebo pill. An event was considered to be a heart attack, a stroke, or other serious illness involving the cardiovascular system. People taking 200 mg of Celebrex twice daily had a risk that was 2.5 times greater than placebo.

Q: I've only been taking Celebrex a short time. Am I at risk?

A: That's unclear. When the study was halted, people had taken Celebrex for an average of 33 months. Studies of Vioxx, a drug that was withdrawn from the market in the fall of 2004, showed a heart-attack risk after 16 months of continuous treatment.

Q: I've heard that other studies didn't find a significant risk for Celebrex.

A: That's right. Two studies were halted on Dec. 16 because one of the studies showed a risk. The other study was looking at 400 mg of Celebrex taken once a day over a similar period of time. The drug's manufacturer, Pfizer, and the Food and Drug Administration are reviewing the studies to find out why there is a discrepancy. Earlier studies showed no increased risk, but those generally have involved lower doses and did not follow patients as long.

Q: Were the studies part of a review of Celebrex's safety?

A: No. The studies were being done to see if Celebrex could be used to prevent colon cancer. Celebrex has been heavily promoted as an alternative to aspirin and other nonsteroidal anti-inflammatories because it doesn't cause gastrointestinal bleeding. According to the National Cancer Institute, over a decade of scientific work has suggested that drugs like Celebrex, called COX-2 inhibitors, may prevent and treat cancer. The study that found the cardiovascular problems was designed to prove whether Celebrex prevents a type of colon cancer. The study that failed to find an increased cardiovascular risk was designed to study whether new colon polyps could be prevented by Celebrex in people who had already had colon polyps removed.

Q: I have a serious condition that causes me chronic pain. Celebrex is the only medication that I've been able to take successfully. What should I do?

A: In the interim recommendations issued Dec. 23, the FDA advises that "physicians prescribing Celebrex (celecoxib) or Bextra (valdecoxib, should consider [the] emerging information when weighing the benefits against risks for individual patients. Patients who are at a high risk of gastrointestinal (GI) bleeding, have a history of intolerance to non-selective NSAIDs, or are not doing well on non-selective NSAIDs may be appropriate candidates for COX-2 selective agents. Individual patient risk for cardiovascular events and other risks commonly associated with NSAIDs should be taken into account for each prescribing situation." Nonselective NSAIDs are drugs like naproxen (Aleve), ibuprofen and aspirin, among others.

Q: How long will Celebrex be available?

A: That's not known. The company that makes it says that it will continue to sell the drug. The FDA has told the company to stop advertising Celebrex while it conducts a safety review.

In the case of Vioxx, which was withdrawn from the market voluntarily by Merck, there had been several studies indicating that the drug may increase the risk of cardiovascular disease. With Celebrex, this is the first major study to suggest such a link, and scientists are still in the midst of analyzing it.

According to the Pfizer Web site, Celebrex currently is approved for use in the United States "for the treatment of arthritis and pain, at recommended doses of 100mg to 200mg daily for osteoarthritis and 200mg to 400mg a day for rheumatoid arthritis. It is also approved for a rare condition called familial adenomatous polyposis in doses up to 800mg per day.”

Patients in the cancer prevention trial that found the problems were taking doses of 400mg to 800mg per day. In the trial to prevent the recurrence of colon polyps -- which did not show a risk of heart problems -- patients were taking 400mg per day.

Q: Is it true that other studies of Celebrex are continuing?

A: Yes. According to its Web site, the National Institutes of Health sponsors more than 40 studies using celecoxib for the prevention and treatment of cancer, rheumatoid and osteoarthritis, dementia and other diseases. The NIH says that it is informing patients in these trials about the new data, so they can make informed decisions about whether to continue with the study or not. In the case of the Alzheimer's study, which was looking at Celebrex, naproxen and placebo, most patients told researchers that they would be afraid to continue in the trial if they might get Celebrex. That was one of the reasons the medications in the study were suspended.

Q: Why has the National Cancer Institute been using COX-2 inhibitors in clinical trials?

Numerous compounds are examined by the NCI for their potential to prevent or treat cancer. One class of compounds, cyclooxygenase (COX) inhibitors, is currently being tested in both prevention and treatment clinical trials.

According to NCI's Web site, epidemiologic studies have shown that people who regularly take non-steroidal anti-inflammatory drugs (NSAIDs) -- such as aspirin and ibuprofen -- to treat conditions like arthritis have lower rates of colorectal polyps, colorectal cancer and death due to colorectal cancer.

NSAIDs block cyclooxygenase enzymes, which are produced by the body when there is inflammation and are also produced by precancerous tissues. Inhibition of COX-2 may help treat and prevent cancer.

Q: Have the cancer studies been successful?

A: It's too soon to tell. A study of Celebrex in people with a precancerous condition called familial adenomatous polyposis (FAP) has shown positive results.

According to NCI, patients with FAP develop hundreds to thousands of precancerous polyps (adenomas) throughout the colon and rectum. Left untreated, nearly all FAP patients develop colorectal cancer by their 40s and 50s.

The primary treatment for FAP is surgical removal of most or all of the colon and rectum with subsequent surveillance of any remaining colorectal segment. A study of FAP, published in 2000 in the New England Journal of Medicine, led to FDA-approval of celecoxib as a treatment that could be added to the standard of care in people with FAP.

There are more than three dozen trials going on to test whether Celebrex prevents cancer of various types, including bladder, breast, cervical, colorectal, esophageal, head and neck, skin, lung, oral and prostate cancers, as well as multiple myeloma. The drug is also being studied in the treatment of people who already have cancer, including tumors of the pancreas, breast, ovary and lung. These studies are in various stages of completion.