Accessibility links
Ancient, Complex Peruvian Communities Explored Along Peru's coast, archeologists find the ruins of some 20 communities clustered along three rivers. Some date back 5,000 years. People there grew crops and built huge stone monuments that predate the Egyptian pyramids. It's believed to be the oldest complex culture in the Americas. NPR's Christopher Joyce reports. 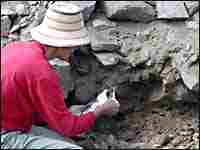 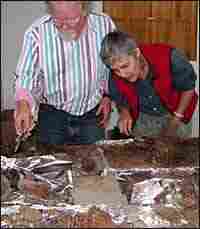 Jonathan Haas of The Field Museum and Creamer examine one of 54 bundles of willow branches found at the bottom of a test pit at Caballete. The archaeologists believe the bundles may have been pre-construction offerings. Proyecto Arqueologico Norte Chico hide caption 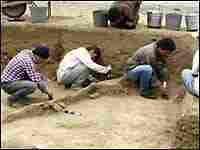 Researchers excavate a buried wall at the site of Caballete in Fortaleza Valley, one of some 20 ancient communities unearthed along Peru's central coast. Proyecto Arqueologico Norte Chico hide caption

Along the coast of central Peru, a remarkable sight is emerging from underneath the desert sand. Archeologists have found the ruins of some 20 communities clustered along three rivers. Some date back 5,000 years. People there grew crops and built huge stone monuments that predate the Egyptian pyramids. As NPR's Christopher Joyce reports, it's believed to be the oldest complex culture in the Americas.

The region where the ancient sites are located is bone dry, except for the land that lies along river valleys that run down to the Pacific Coast. There, archaeologists found mounds of earth; inside were terraced stone platforms, some 80 feet high.

Archeologist Jonathan Haas of Chicago's Field Museum says the region's climate dried up about 3,000 years ago. That drove hunters and gatherers to the coast, where they settled and began to fish. As Haas and his colleagues report in the current issue of the journal Nature, they also built villages inland along the rivers and grew vegetables and cotton. Trade followed, along with monumental buildings and other trappings of urban life.

There are other places in the Americas with signs of settlement and agriculture as old as those in the Norte Chico region of Peru. But none was as complex, says anthropologist and Peru expert Dan Sandweiss at the University of Maine.

Haas says it's not clear why these communities died out, and what influence they might have had on the Nazca and Inca cultures that followed.

"I've been doing archeology for more than 35 years, and I've been stunned by the archeology we're running into," Haas says. "It's like somebody has granted my very best wish."