With some of the most productive farmland in the world, Iowa is an agricultural powerhouse known for its corn, soybeans, cattle and hogs.

But an Iowa research center says some farmers here and elsewhere should consider moving away from commodity crops to what's being called "place-based" foods.

NPR's Greg Allen reports that a good example can be found in Newton, Iowa, the home of Maytag cheese. The company was started by Fred Maytag, then president of the well-known appliance maker and owner of a small dairy farm in central Iowa.

While the appliance maker is now publicly owned, the dairy farm remains very much a Maytag family business, where many employees have worked for decades. They make a million pounds of blue cheese each year, and they do it the same way as when the plant opened: almost entirely by hand. 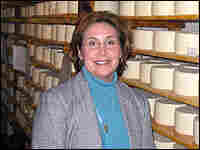