Accessibility links
World's Tallest Building to Open in Taipei Taipei 101, the world's tallest building, will be officially inaugurated in Taipei, Taiwan, on Dec. 31. Designing the 1,666-foot skyscraper in the earthquake- and typhoon-prone region presented engineers with quite a challenge. Hear NPR's Melissa Block and structural engineering consultant Dennis Poon. 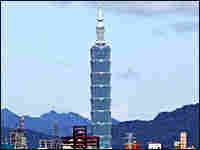 A view of Taipei 101, the world's tallest building, in Taipei, as photographed on Aug. 6, 2004. Reuters hide caption 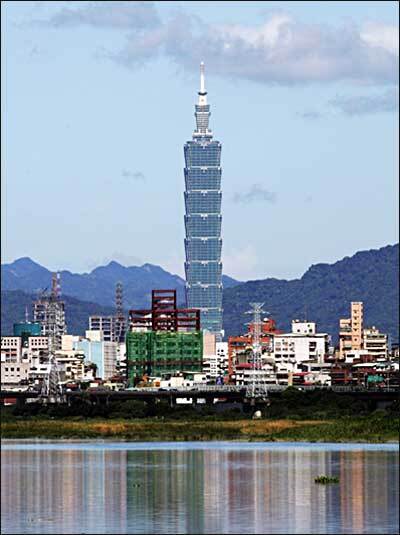 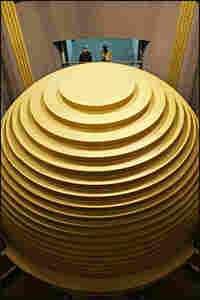 This golden-plated sphere, weighing 730 tons (660 metric tons), is the world's biggest and heaviest tuned mass damper. It helps anchor the building and reduce wind sway. It was incorporated into Taipei 101's design and is visible from up in the tower. Reuters hide caption

Taipei 101, the world's tallest building, will be officially inaugurated in Taipei, Taiwan, on Dec. 31. The 1,666-foot skyscraper tops the previous record holder, the Petronas Towers in Kuala Lumpur, by 183 feet.

Designing the 101-story building in the earthquake- and typhoon-prone region presented quite a challenge. Engineers had to account for the fact that the tower stands about 650 feet from a major fault line, and that it will face winds of 100 mph.

Still, Taipei 101 won't hold the title of world's tallest skyscraper for long. Buildings in Shanghai and Dubai are expected to surpass it, as will the Freedom Tower in New York -- on the World Trade Center site -- which is scheduled for completion in 2009.