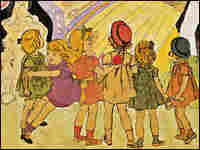 For much of his life, Henry Darger was almost invisible. He was an odd man -- a reclusive janitor whose outside life revolved around going to church and monitoring the weather. But in death, Darger has become well known and honored, inspiring books, a musical and now, a documentary.

A talented and troubled artist, Darger used large paintings and a 15,000 page epic novel titled The Realms of the Unreal to create a secret mystical world of heroic little girls fighting evil. Filmmaker Jessica Yu's new film about Darger has the same name. She talks with NPR's Jennifer Ludden about the documentary.

'Realms of the Unreal' on the Web