Accessibility links
Detroit Struggles to Overcome Urban Blight White-and-middle-class black flight to the suburbs has left Detroit's landscape pockmarked with abandoned homes and buildings. The city has demolished some of these structures. But not everyone agrees bulldozing is the best solution.

This week, Detroit is launching a new crackdown on one of the city's ugliest problems -- urban blight. A new city department will aggressively pursue building owners for code violations, in an attempt to clean up a pockmarked urban landscape unlike any other in America.

For decades, whites and middle-class blacks have left the Motor City for the suburbs. Left behind are thousands of crumbling homes and buildings, a sight that's become a symbol of Detroit's economic decline. 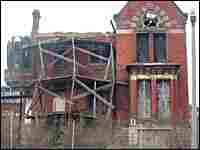 An abandoned building in Detroit. Painted on it is a yellow letter "D" -- it means the structure has been deemed unsafe and slated for demolition. Marisa Peñaloza, NPR hide caption

The city has demolished some of these buildings. In some cases, entire blocks have only one or two homes still standing. But some 15,000 more remain -- and not everyone agrees that bulldozing is the best solution. NPR's Cheryl Corley reports.

Detroit's efforts to rid itself of dilapidated homes and buildings have drawn both supporters and critics, who worry about the lack of affordable housing for low-income residents. Hear various perspectives on the issue from: George Galster, professor of urban affairs at Wayne State University; Amru Meah, director of Detroit's Building & Safety Engineering Department; and Maryann Mahaffey, president of the Detroit City Council.

An Argument over Urban Blight