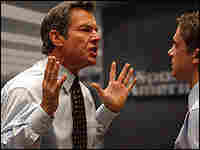 Dennis Quaid finds himself with a boss half his age (Topher Grace) who winds up involved with Scarlett Johansson, playing Quaid's daughter. Universal Pictures hide caption

Despite the January lull in the release of big Hollywood movies, Los Angeles Times movie critic Kenneth Turan says there's at least one gem to be found.

Writer/director Paul Weitz has had past success with About a Boy, which he directed with brother Chris. That film was a quiet, intelligent departure from the Weitz brothers' early success with the teen romp American Pie.