Sept. 20, 1985, Report on the Senate Hearings on the Recording Industry (Note: Report Contains Lyrics Some May Find Objectionable)

Parents, families, the home — that is where education has to take place. That is where the guidelines have to be set by parents.

Twenty years ago, Tipper Gore bought a Prince album for her 11-year-old daughter and was astonished at the explicit lyrics they heard when they played it. That incident prompted Gore, wife of then Sen. Al Gore, to go before Congress to urge warning labels for records marketed to children. 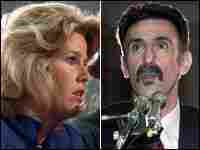 Since then, the national debate has extended to content on television, video games and the Internet.

Gore recalls that she got mad when she tried to return Prince's Purple Rain to the store where she bought it. The retailer wouldn't take the record back because it had been opened and played. Gore says she surveyed the music landscape and found everything from "bubblegum" pop to heavy metal to songs about violence against women and killing police officers.

That's when she helped form the Parents' Music Resource Center, which took the issue up with the recording industry and Congress.

Gore, whose 1985 testimony before a Senate panel was countered by musicians Frank Zappa and Dee Snyder of the group Twisted Sister, says she wasn't out to censor the objectionable material. "I'm a strong believer in the First Amendment," she says. Instead, Gore continues to advocate "consumer information in the marketplace."

But the final answer rests in the home, she says. "Everybody has to make those decisions according to their own family values and how they want to teach their children," Gore tells NPR's Robert Siegel.

Following is the introduction to Raising PG Kids in an X-Rated Society, written in 1987 by Tipper Gore.

Like many parents of my generation, I grew up listening to rock music and loving it, watching television and being entertained by it. I still enjoy both. But something has happened since the days of "Twist and Shout" and "I Love Lucy."

This is a book about the kinds of violent and explicit messages our children are receiving through the media and what we as parents can do about it.

I decided to get involved because I began to see the kinds of record lyrics that my children were being exposed to. It shocked me and made me angry. I started looking deeper into the problem, and became even more concerned.

This kind of rock music is only part of an escalating trend toward the use of more explicit sex and graphic violence in entertainment industry offerings, from movies and videos to jeans and perfume ads. Music is the most unexpected medium, and rock music has shown perhaps the least willingness to exercise self-restraint.

But in virtually every medium, the communications industry offers increasingly explicit images of sex and violence to younger and younger children. In the course of my work, I've encountered a degree of callousness toward children that I never imagined existed. No one asks what is in the product or its effect on kids, only how well it will sell.

The dilemma for society is how to preserve personal and family values in a nation of diverse tastes. Tensions exist in any free society. But the freedom we enjoy rests on a foundation of individual liberty and shared moral values. Even as the shifting structure of the family and other social changes disrupt old patterns, we must reassert our values through individual and community action. People of all political persuasions --conservatives, moderates, and liberals alike -- need to dedicate themselves once again to preserving the moral foundation of our society.

Censorship is not the answer. In the long run, our only hope is for more information and awareness, so that citizens and communities can fight back against market exploitation and find practical means for restoring individual choice and control.

As parents and as consumers, we have the right and the power to pressure the entertainment industry to respond to our needs. Americans, after all, should insist that every corporate giant -- whether it produces chemicals or records -- accept responsibility for what it produces.

Let me apologize in advance for the profane language and disturbing images that appear throughout this book. These examples are used to expose the material for what it is. I believe that the current excesses could not and would not have developed if more people had been aware of them. Unfortunately, many parents remain unaware of the indecent liberties some entertainers take with their children. Perhaps full disclosure will stir parents to try to stop the wholesale exploitation of American youth.

More than anything else, I want this book to be a call for American parents. I want to offer them the very real hope that we can reassert some control over the cultural environment in which our children are raised.

From Raising PG Kids in an X-Rated Society Copyright © 1987 by Mary Elizabeth Gore.