Accessibility links
Dog-Sized Mammal Dined on Dinosaurs A fossil find overturns the conventional wisdom that the earliest mammals were all rodent-sized and meek. One of the fossils was found with its last meal -- a young dinosaur -- still in its stomach. 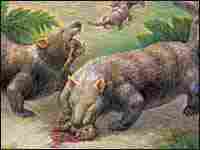 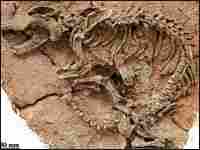 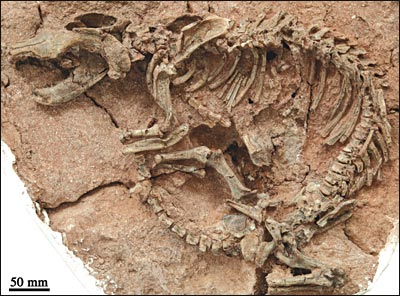 The skeleton of the dog-sized mammal R. giganticus.

Fossil-hunters in China have discovered two skeletons from a kind of animal never seen before: a dog-sized mammal that lived about 135 million years ago. The discovery overturns the conventional wisdom that the earliest mammals were all rodent-sized and meek. As NPR's Christopher Joyce reports, this animal apparently munched on dinosaurs. 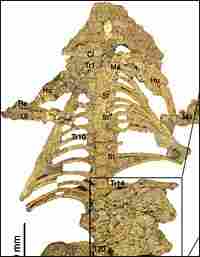 Peek inside an ancient tummy: Above, a detailed view of the Repenomamus skeleton and its stomach contents (the fossil's skull and jaw are not shown). American Museum of Natural History hide caption

Nestled inside one of the skeletons -- where its stomach once was -- scientists found a tiny set of bones, the remains of a small dinosaur about five inches long from tip to tail. Scientists say the find will trigger some rethinking about the relationship between mammals and dinosaurs, and how they influenced each other.

The fossils, called Repenomamus, were found in China's Liaoning Province, a region that's produced numerous unique fossils in recent years. The findings appear in the current issue of the journal Nature.