'5 Films About Christo and Jeanne-Claude'

'5 Films About Christo and Jeanne-Claude'

» An interview with the surviving Maysles brother, Albert, and with Christo and Jeanne-Claude, recalling their first meeting in Paris in the early 1960s, and the highlights of their 30-year-plus collaborative friendship. ("The four of us are a twosome," Jeanne-Claude says.)

» An 81-page book with photos, sketches and an essay by Charles Taylor. 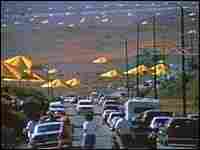 Curious onlookers pile out of their cars to get a better view of the 1991 "Umbrellas" project in a valley of rolling hills about 100 miles north of Los Angeles, Calif. Maysles Films/Plexifilm hide caption

Albert and David Maysles are probably best known for Gimme Shelter, their 1970 documentary about the Rolling Stones. Gimme Shelter follows the band into the recording studio and across North America as the band tours. And their cameras roll relentlessly during the infamous Altamont Speedway concert, when zonked-out audience members watched one of their own being stabbed to death by members of the notorious Hells Angels outlaw biker gang, which had been hired for security. It's 91 minutes of pure zeitgeist. 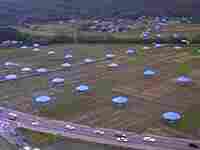 At the same time as the California umbrellas project, a similar project with blue umbrellas unfolded in Japan. Maysles Films/Plexifilm hide caption

The opposite is true of the brothers' contemplative, atemporal films about "environmental artists" Christo and Jeanne-Claude. The controversial duo enveloped the Pont Neuf in Paris within acres of shimmering fabric, curtained a Colorado valley, dotted the coastal landscapes of California and Japan with brightly colored umbrellas, circled 11 Biscayne Bay islands with electric-pink sheeting and ran an enormous white nylon fence through 24 miles of ranch land in the U.S. West.

Each of these projects was lovingly and separately documented in films directed by the brothers Maysles and their collaborators. Now, they're available as a three-disc set. The earliest of the movies, Valley Curtain, was nominated for an Oscar in 1973. That film tracks the progress of the couple's first big project in the United States. Valley Curtain is laced with tiny moments of art -- from a young Jeanne-Claude stretched out on the ground in a hard hat and boots, smoking a cigarette, to the burly engineers' slow transformation from intense skepticism about the artwork to a fierce determination to realize it, and then their unbridled awe as the dazzling orange material unfolds across the earth's cleft. 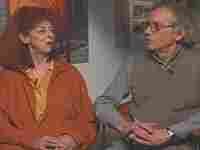 The documentaries, each about an hour long, draw viewers into the artist duo's world of stunning vision, bullheaded stubbornness, flower-child flights of fancy and mind-bending logistics. Along with the artists, viewers pore over sketches, coax reluctant construction workers and attend municipal meetings as city council members sit stupefied by the proposals before them. The Maysles follow Jeanne-Claude as she knocks on door after door in neighborhoods near project sites, tirelessly explaining the project and soliciting involvement. (Jeanne-Claude has said their artistry lies partly in the process, and these films bring the viewer into both that and the completed project.)

Each film glories in an extended, grand aerial sweep, the camera sailing above the landscape and the completed project. It should be noted that Christo and Jeanne-Claude express disdain for this IMAX-like gesture: "We don't make our art for the birds," Jeanne-Claude sniffs at one point in The Islands. But it's refreshing to remember there are two aesthetic sensibilities at play here, and the artistic duo doesn't always triumph over the Maysles' vision.

The Maysles do engage in their fair share of Christo propaganda. Interviewees uniformly express wild enthusiasm once each project is done. A teary-eyed Parisian confides he'd like the Pont Neuf to stay wrapped forever. And in the final film, 1995's Umbrellas, a woman whose mobile home overlooks a cluster of 18-foot yellow parasols exclaims, "It's the most beautiful thing I've ever seen besides the birth of my daughter!"

As with Gimme Shelter, the Maysles do not shy from real-life tragedy. Umbrellas is dedicated to two people who died as a result of the project. The film shows a horrific storm brewing black on the horizon that led to the umbrellas toppling, and Jeanne-Claude's televised response on news programs after a woman was crushed by one. Jeanne-Claude announced after the tragedy that the project would be closed -- which led to the second death, the accidental electrocution of a worker in Japan as he helped take down an umbrella.

"None of the Maysles' films show the projects being dismantled; that would be too sad," writes Salon.com critic Charles Taylor in a short book accompanying the DVDs. He also adds that there's no need for those projects to be fleeting. That's where the Maysles' work seems to fit with the Christos' as smoothly as tongue to groove, a durable response to evanescence.

This ongoing collaborative project seems to drift in its own timeless private dimension in which the eventual realization of vision is king. Locales, supporting characters and art world fashions may change, but in these documentaries, Christo and Jeanne-Claude endure as forces of nature even more monumental than their artworks, and somehow less ephemeral.