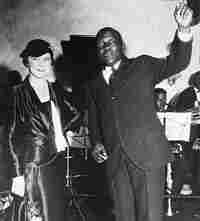 Jack Johnson and his fourth wife, the former Irene Pineau, at the 1931 opening of his Los Angeles nightclub. The couple married in 1925. Bettmann/Corbis hide caption 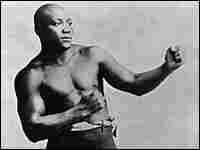 Jack Johnson (1878-1946) was the first African-American to hold the title of heavyweight boxing champion of the world. He successfully defended the championship against white challengers four times before losing it in 1915. Bettmann/CORBIS hide caption

In 1908, Jack Johnson made history by becoming the first black heavyweight boxing champion of the world, stunning crowds in Sydney, Australia, by knocking out Tommy Burns. Many whites were outraged by the win -- and soon Johnson found himself squared off with retired heavyweight champ Jim Jeffries, who became known as the "Great White Hope."

Johnson famously went on to beat Jeffries, who had retired after receiving an initial challenge from him. Acclaimed documentary filmmaker Ken Burns tells NPR's Renee Montagne that Johnson's victory made the boxer rich, but in a violently racist era, his troubles were just beginning.

Burns's latest project, Unforgivable Blackness: The Rise and Fall of Jack Johnson, details Johnson's humble beginnings in the Jim Crow South. At a time when boxing was outlawed in most states, Johnson criss-crossed the country fighting anyone who would enter the ring.

As Johnson developed his skills and earned a name for himself, elite white boxers refused to fight him, saying he was inferior. But as Burns' film details, many also thought that giving a black man a chance at the heavyweight title would be too costly, and might offset the "moral balance" of society.

During his reign as champ, Johnson was flamboyant and outspoken, publicly making his appetite for white women known, a taboo at the time. Burns says Johnson was an independent thinker who spoke his mind -- and often upset both whites and blacks in the process.

Timeline, Clips and Background Materials on 'Unforgiveable Blackness' at PBS.org