Accessibility links
Ferguson Panel Outlines Possible Solutions To Community's Problems : The Two-Way "We have begun to build a problem-solving machine," say the members of a governor-appointed panel that has spent months identifying entrenched issues in Ferguson and St. Louis. 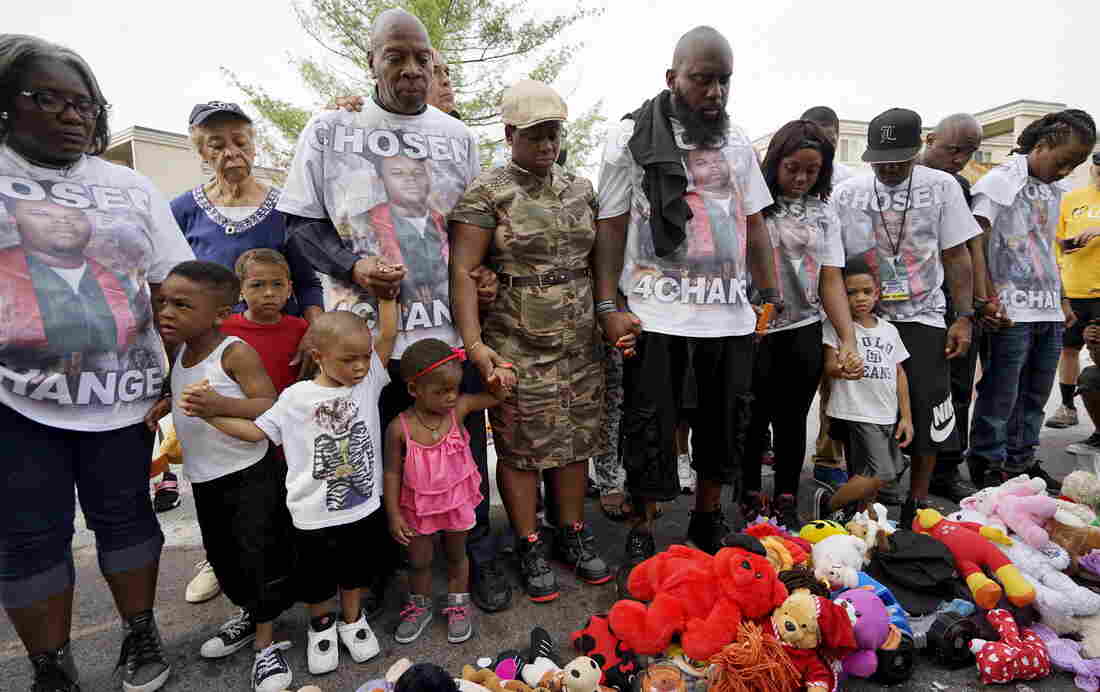 A new report by a governor-appointed commission suggests ways for communities in St. Louis to move forward after the police killing of Michael Brown last summer. Here, Brown's father and other relatives pray at a memorial to Brown last month. Rick Wilking/Reuters /Landov hide caption 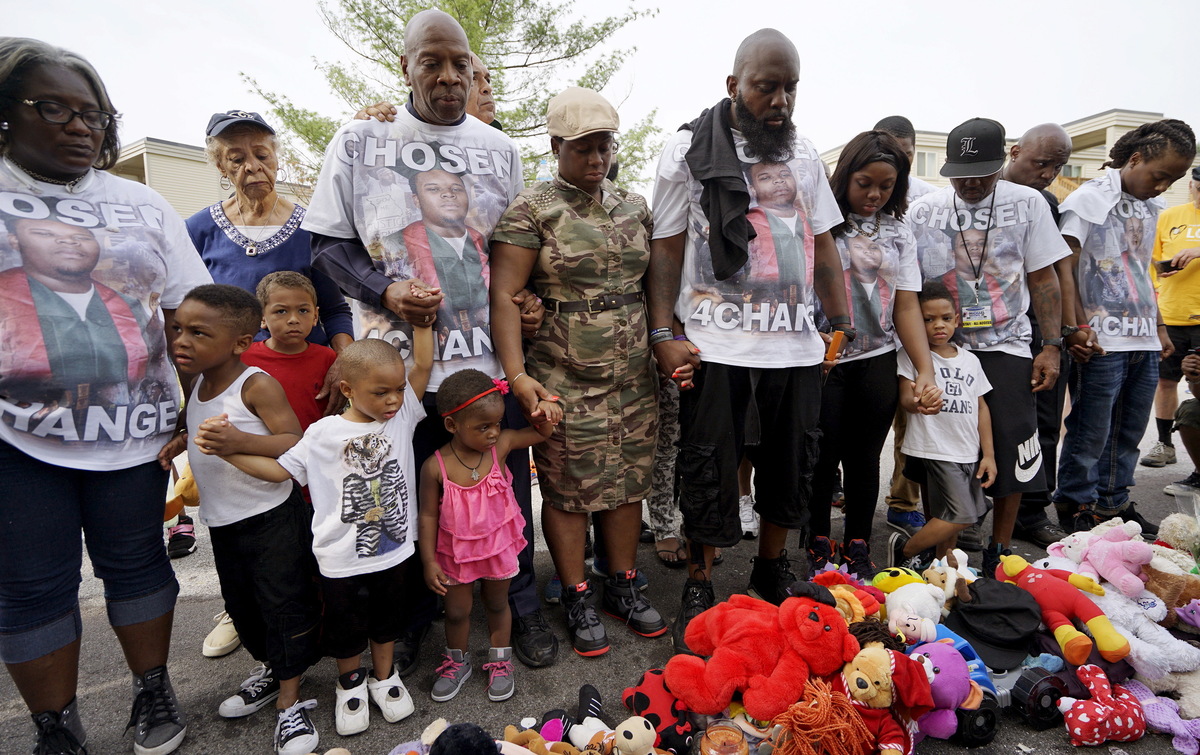 A new report by a governor-appointed commission suggests ways for communities in St. Louis to move forward after the police killing of Michael Brown last summer. Here, Brown's father and other relatives pray at a memorial to Brown last month.

"We have begun to build a problem-solving machine," say the members of a governor-appointed panel that has spent months identifying entrenched issues in Ferguson, Mo., and talking with members of the community about ways to tackle those problems.

From eliminating jail time for minor offenses to changing how police are trained and raising the minimum wage, the commission is issuing "calls to action" for Ferguson, for St. Louis and for the state of Missouri that cover broad ground.

Several of the policy changes have to do with court fees and fines. For instance, municipal courts should "determine a defendant's ability to pay," the commission says. The panel also calls for authorities to withdraw and cancel all "failure to appear" warrants.

Those are among the recommendations in the Ferguson Commission's nearly 200-page final report that is meant to help the Missouri community heal and move forward after the killing of Michael Brown by police sparked rioting that was widely seen as a reaction to years of problematic policies.

The panel found that on average, 55 percent of respondents to a community poll said they've experienced trauma due to racism. As St. Louis Public Radio's Jason Rosenbaum says, the commission concludes that in the city, "We have not moved beyond race."

But the commissioners also wrote, "Cautiously at times, enthusiastically at others, what the people have said to us again and again is that they believe change is possible. They believe this is our moment."

Here's a quick rundown of highlights from the recommendations about how the city handles its business:

Eliminate Incarceration for Minor Offenses
Minor and nonviolent offenses should not trigger jail time, and municipal courts should not issue "failure to appear" warrants on such charges, which often lead to incarceration.

Determine Defendants' Ability to Pay
The first time a defendant appears in court, municipal courts should determine a defendant's ability to pay a fine or fee. Courts should also take up the issue at any hearings over nonpayment.

Collect Municipal Court Debts Like Civil Debts
"Municipal courts shall collect debts in a manner consistent with other civil debts."

Expunge Old Convictions of Non-Repeat Offenders
"All municipal convictions of non-repeat offenders shall be expunged after a defined period of time, predetermined by the Missouri Supreme Court."

Revise Use of Force Policies and Training
Missouri police departments should "authorize only the
minimal amount of force necessary" that is proportional to the incident and meets other goals.

In addition to those calls to action, several recommendations target poverty. They include:

Raise the Minimum Wage
The city should set a minimum of $15 an hour. Missouri's minimum pay rate is $7.65 an hour.

End Predatory Lending
The state should revise the lending industry's rules on repayment terms, underwriting standards, and collection practices — and the maximum APR should be capped at 36 percent.

Expand Medicaid Eligibility
"Expand eligibility for Medicaid to 138 percent of the federal
poverty level (or an annual income of $32,913 for a family
of four) so that Missouri can take full advantage of federal
funds available to meet the health needs of Missourians."

The Ferguson Commission's report is meant to be the beginning of a process, not the end of one, the commissioners say. They said they've seen that Ferguson's residents are willing to take ownership of their community. The commission wrote:

"They know what's at stake. They know the eyes of the nation are upon us. They have heard the skeptics and the doubters.

"But the people believe, and we believe, that our region is up to the challenge."