Accessibility links
'Angels and Demons' Draws Tourists to Rome While Paris has been the favored destination for visitors seeking clues to the Holy Grail, Rome has drawn new attention. The book Angels and Demons has tourists seeking hidden meanings in the city's art and religious symbols.

Tourists are falling under the influence of a new inspiration when it comes to travel in Europe: the books of novelist Dan Brown. While Paris has been the favorite destination for visitors seeking clues to the Holy Grail, fans of an earlier Brown bestseller are lining up for mystery tours of art in Rome. As NPR's Sylvia Poggioli reports, the book, Angels and Demons, has tourists seeking hidden meanings in the city's art and religious symbols.

The contemporary plot of Angels and Demons is beyond implausible: An attempt to blow up the Vatican as Cardinals gather to elect a new pope, with wholesale murders and rumored test-tube babies as side-plots. Despite the fantastic elements, many visitors say the tour helps them see the plot as a kind of ghost story.

That element stems from the historical devices in the thriller. At the center sits the Illuminati, a Mason-like society founded in Germany in 1776 that, in Brown's novel, confronted the Inquisition in Rome a century earlier. The story turns on a conflict between science and religion, embodied in symbols hidden in Rome by actual figures, such as sculptor Giovanni Lorenzo Bernini.

While the Catholic Church has criticized Brown's books for sensationalizing -- or fabricating -- history, tour guides in Rome are happy to accommodate fans of the book.

As tourist Courtney Morehouse says, she’s learned a lot about Bernini's ability to send very secular messages through ostensibly religious subject matter. "The artists... were able to convey a double message in most of the art, and it's interesting to look at a different perspective of that message."

Excerpt from Angels and Demons, Chapter 5:

On a busy European street, the killer serpentined through a crowd. He was a powerful man. Dark and potent. Deceptively agile. His muscles still felt hard from the thrill of his meeting.

It went well, he told himself. Although his employer had never revealed his face, the killer felt honored to be in his presence. Had it really been only fifteen days since his employer had first made contact? The killer still remembered every word of that call...

"My name is Janus," the caller had said. "We are kinsmen of a sort. We share an enemy. I hear your skills are for hire."

"It depends whom you represent," the killer replied.

The caller told him.

"Is this your idea of a joke?"

"You have heard our name, I see," the caller replied.

"Of course. The brotherhood is legendary."

"And yet you find yourself doubting I am genuine."

"Everyone knows the brothers have faded to dust."

"A devious ploy. The most dangerous enemy is that which no one fears."

The killer was skeptical. "The brotherhood endures?"

"Deeper underground than ever before. Our roots infiltrate everything you see…even the sacred fortress of our most sworn enemy."

"Impossible. They are invulnerable."

"Very soon, you will believe. An irrefutable demonstration of the brotherhood's power has already transpired. A single act of treachery and proof."

"What have you done?"

The caller told him.

The next day, newspapers around the globe carried the same headline. The killer became a believer.

Now, fifteen days later, the killer's faith had solidified beyond the shadow of a doubt. The brotherhood endures, he thought. Tonight they will surface to reveal their power.

As he made his way through the streets, his black eyes gleamed with foreboding. One of the most covert and feared fraternities ever to walk the earth had called on him for service. They have chosen wisely, he thought. His reputation for secrecy was exceeded only by that of his deadliness.

So far, he had served them nobly. He had made his kill and delivered the item to Janus as requested. Now, it was up to Janus to use his power to ensure the item's placement.

The killer wondered how Janus could possibly handle such a staggering task. The man obviously had connections on the inside. The brotherhood's dominion seemed limitless.

Janus, the killer thought. A code-name, obviously. Was it a reference, he wondered, to the Roman two-faced God…or to the moon of Saturn? Not that it made any difference. Janus wielded unfathomable power. He had proven that beyond a doubt.

As the killer walked, he imagined his ancestors smiling down on him. Today he was fighting their battle, he was fighting the same enemy they had fought for ages, as far back as the 11th century... when the enemy's crusading armies had first pillaged his land, raping and killing his people, declaring them unclean, defiling their temples and Gods.

His ancestors had formed a small but deadly army to defend themselves. The army became famous across the land as protectors-skilled executioners who wandered the countryside slaughtering any of the enemy they could find. They were renown not only for their brutal killings, but also for celebrating their slayings by plunging themselves into drug-induced stupors. Their drug of choice was a potent intoxicant they called hashish.

As their notoriety spread, these lethal men became known by a single word-Hassassin-literally 'the followers of hashish'. The name Hassassin became synonymous with death in almost every language on earth. The word was still used today, even in modern English... but like the craft of killing, the word had evolved.

It was now pronounced "assassin." 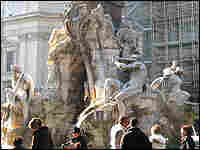