Listen
'Hairstyles of the Damned' Puts Punk on the Page 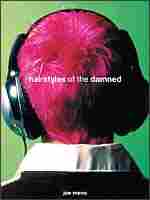 Detail from the cover of 'Hairstyles of the Damned.' hide caption

"You suck it: Judith Regan. And all you other bad publishing corporations. Be ready, the end is nigh." — From the acknowledgments of Hairstyles of the Damned

With almost no major reviews or marketing, the coming-of-age story Hairstyles of the Damned has sold 20,000 copies and gone into its third printing. Scott Simon talks with the novel's author, Joe Meno. 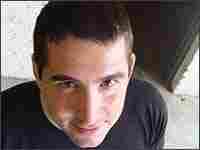 Hairstyles is an autobiographical tale about growing up in the '90s on Chicago's South Side. The main character, Brian, attends Catholic school and pines after his best friend Gretchen, a punk-loving brawler who "the rest of the world considered fat." The music they listen to -- by the Misfits, Ramones, Black Flag -- provides the soundtrack for their struggles.

A previous novel by Meno, How the Hula Girl Sings, was published by St. Martin's Press. Hairstyles of the Damned started off at a significantly less well known publisher with only 4,000 copies to start. Meno has some choice words for "conservative" publishers such as Judith Regan, warning against the reluctance to publish riskier material. Hairstyles, despite its small initial printing, still gained a following among readers who know something about feeling like an outcast and finding solace in punk music.

Excerpt from Hairstyles of the Damned by Joe Meno (contains some graphic language):

The other problem I had was that I was falling in love with my best friend, Gretchen, who I thought the rest of the world considered fat. We were in her crappy car and singing, and at the end of the song "White Riot," the one by the Clash, I realized by the way I was watching her mouth pucker and her smile and her eyes blink and wink, we were way more than friends, at least to me. I looked over at Gretchen driving and she was starting to sing the next song, "Should I Stay or Should I Go Now?" by the Clash again, and I said, "I love driving around with you, Gretchen," but because the radio was so loud all she could do was see my mouth move.

It was a Tuesday around four in the afternoon, the first semester of our junior year in high school, and neither one of us had anything to do, because Gretchen had just recently been fired from the Cinnabon at the mall for flipping off a female customer when she asked for more icing, and I wasn't allowed to work because my mother was very overprotective of me and insisted that I only focus on studying. I yelled something to Gretchen again and she nodded at me and then turned her head back to drive and kept on singing and I guess I looked over at her, at her short blondish-pink hair -- some of it hanging in her face, some tucked behind her ear, some dyed brighter pink than the rest -- and I watched the way her mouth moved again and I noticed she didn't ever wear lipstick and it was one of the reasons I think I liked her; and also I smiled at how she was holding her small white hands on the steering wheel very seriously, like she had been driving way before she had gotten her license last year. I also looked at her breasts; I looked at them and they were big, very big, more than I knew what to do with, and I guess the truth of the matter was they were big because she was fat, and it didn't matter to me then, not the way it would if I was like hanging out with Bobby B. or some other guy at the mall, and he'd be like, "Check out that porker," and I'd be like, "Yeah," and then I'd laugh. Gretchen was fat, I mean not like obese, but was definitely big, not her face so much, but her middle and her behind.

Worse than that, she was known for kicking other girls' asses on a regular basis. It was not very cool. There was the awful hair-pulling incident with Polly Winchensky. There was the enormous black eye she gave Lisa Hensel. There was the time Gretchen broke Amy Schaffer's arm at a Holloween party -- you know, when Amy Schaffer had rolled her eyes at Gretchen's costume, when she came as JFK post-assassination, with the black suit and blood and bullet holes, and Amy Schaffer said, "You really do look like a man," and Gretchen just turned and grabbed Amy Schaffer's arm and twisted it so hard behind her back that Amy Schaffer's school drama days were ended right there, just like that, so that poor Amy Schaffer had to go around for the next two years milking sympathy, like a f---ing martyr wearing her air-cast everywhere, long after it could have possibly been needed for anything recuperative.

Also, well, also Gretchen wasn't the most feminine girl in the world, sincerely. She swore a lot and only listened to punk, like the Misfits and the Ramones and the Descendents, especially when we were in the car, because, although it had a decent stereo for a Ford Escort, there was a tape that had been stuck in the cassette player for about a year now and most of the time that was all it would play, and you had to jab the tape with a pen or a nail file to get it to start, and the tape was same handpicked mix Gretchen had thought was cool a year ago, which according to the label on the tape was what she had called White Protest Rock, version II.

Gretchen's mix-tapes, her music choices, were like these songs that seemed to be all about our lives, but in small random ways that made sense on almost any occasion. Like "Should I Stay or Should I Go Now?" Maybe it meant I should tell Gretchen how I was feeling. Or maybe it meant I should just go home. To me, the tapes were what made me like her, then love her so much: the fact that in between the Misfits and the Specials, she would have a song from the Mamas and the Papas, "Dream a Little Dream of Me" or something like that. Those mix-tapes were the secret soundtrack to how I was feeling or what I thought about almost everything.