Accessibility links
Johnny Carson Dies at 79 Johnny Carson, who hosted The Tonight Show from 1962 to 1992, has died at the age of 79. While the Carson family released few details of his death, it reportedly resulted from complications stemming from emphysema. 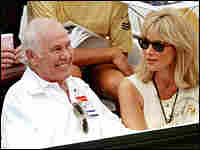 Johnny Carson and his wife Alex attended a tennis match at the Canadian Open in Toronto in 1995. Reuters hide caption

Johnny Carson, who hosted The Tonight Show from 1962 to 1992, has died at the age of 79. While the Carson family released few details of his death, it was reportedly the result of complications stemming from emphysema.

As host of the NBC late-night mainstay, Carson created well-loved characters like Art Fern and Carnac the Magnificent, the psychic with questionable vision. He also gave audiences a blend of Hollywood showmanship and folksy charm that won him generations of fans.

"I am taking the applause sign home, putting it in the bedroom."

(On then-Vice President Dan Quayle, whose remarks on single mothers and the TV show Murphy Brown were making headlines): "I really want to thank him for making my final week so fruitful."

"And so it has come to this. I am one of the lucky people in the world. I found something that I always wanted to do and I have enjoyed every single minute of it."

"You people watching, I can only tell you that it's been an honor and a privilege coming into your homes all these years to entertain you. And I hope when I find something I want to do and think you would like, I can come back and (you will be) as gracious in inviting me into your homes as you have been." "I bid you a very heartfelt good night."

The Tonight Show consistently won its time slot during Carson's tenure at the show, as even sidekicks like Ed McMahon and bandleader Doc Severinsen became household names.