Accessibility links
'Worlds of Difference': Latter-Day Saints and Indians Between 1954 and 1996, the Church of Jesus Christ of Latter-day Saints sponsored a program for American Indian children, intended to lead a strayed tribe back to Christianity. 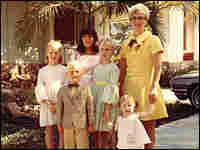 The Placement program touched more than 60 tribes across the United States and Canada. Above, a Placement family in Southern California, circa 1970. hide caption

Between 1954 and 1996, the Church of Jesus Christ of Latter-day Saints sponsored a program for American Indian children. The Indian Student Placement Program had two aims: to provide Native children with an education and to help the Church fulfill one of its central prophecies.

According to Mormon teachings, American Indians are descendants of the ancient House of Israel and church members have a responsibility to help bring them back to the Kingdom of God.

Since the Church's founding, Mormon missionaries have sought to spread their religion to Native people -- the Placement Program was part of this effort. More than 20,000 children – mostly Navajo -- were baptized and enrolled in the program over the course of 40 years.

Producer Kate Davidson spent a year talking with people involved in Placement. The story that emerged is a complicated one -- about culture and families and what can happen when people live closely but in different worlds. Our report, "Saints and Indians," is part of the series Worlds of Difference.

'Saints and Indians' at Worlds of Difference Site