Accessibility links
Paris Combo's Multicultural 'Motifs' With hints of Django Reinhardt, Dixieland Jazz and French pop songs from the 1930s, the band Paris Combo has a knack for making the old new again. NPR's Renee Montagne talks with them about their unique sound, their musical inspirations and the Paris music scene. 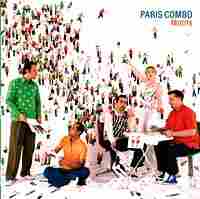 With hints of Django Reinhardt, Dixieland Jazz and French pop songs from the 1930s, mixed together with World Beat and tropical fusion, the band Paris Combo has a knack for making the old new again. Already a hit in Europe, the five-person band is touring the United States and Canada playing songs from their new CD, Motifs. 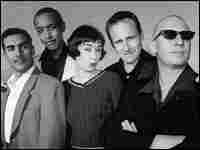 The band members are as diverse as their music inspirations. Pianist and trumpeter David Lewis is from Australia and has played with some of Africa's greatest musicians. Guitarist Potzi was born to Algerian parents, and throws bits of gypsy jazz and Arabic music into the mix. Drummer François Jeannin, a French native, loves funk and electronica beats. Madagascar-born bassist and singer Mano Razanajato adds a Latin flavor to the band's sound. Paris-born singer Belle du Berry got her start in punk-rock bands.

Du Berry says this multi-ethnic mix would have been typical in Paris between the end of World War I and the start of World War II. "It's not that we are particularly intent on reproducing the '30s," she tells NPR's Renee Montagne. "A lot of the music that was being made in that era -- whether it be [Duke] Ellington or Fletcher Henderson or early Billie Holiday, Django Reinhardt -- is very inspiring."