Accessibility links
Wiggle While You Work: Fidgeting May Fight Fat Overweight "couch potatoes" burn fewer calories a day because they sit more than their naturally lean counterparts, who tend to be more fidgety and restless, a new study shows. The findings suggest small changes in daily activity could have a major impact on weight loss.

Listen
Wiggle While You Work: Fidgeting May Fight Fat 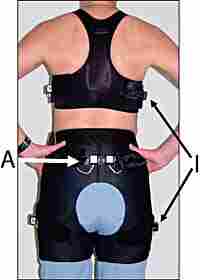 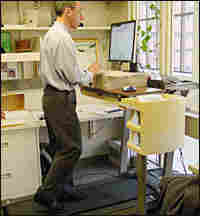 Mayo Clinic researcher Jim Levine has put his findings into practice, setting up his office with a $300 treadmill, purchased at a department store, and a computer situated atop a hospital tray table. Courtesy James Levine hide caption

Researchers at the Mayo Clinic carefully tracked the movements and calorie-intake of 10 obese and 10 thin study participants. They found that overweight people burned 350 fewer calories a day because they sat for 150 minutes more a day than did thin people, who tended to be more fidgety during their daily activities.

Those findings suggest that making small changes to daily activities -- by tapping your toes, wiggling or otherwise expending more restless energy -- could be critical to weight loss.

The study, led by Dr. Jim Levine of the Mayo Clinic, was designed to examine the role of NEAT -- "non-exercise activity thermogenesis," or calories burned during the activities of daily living -- in obesity. Levine says the implications from the study are clear: get moving.

"Our patients have told us for years that they have low metabolism, and as caregivers, we have never quite understood what that means -- until today," Levine said in a statement. "The answer is they have low NEAT, which means they have a biological need to sit more. A person can expend calories either by going to the gym, or through everyday activities. Our study shows that the calories that people burn in their everyday activities -- their NEAT -- are far, far more important in obesity than we previously imagined."

He adds that the NEAT defect in obese patients doesn't reflect a lack of motivation.

"It most likely reflects a brain chemical difference, because our study shows that even when obese people lose weight, they remain seated the same number of minutes per day," Levine said. "They don't stand or walk more. And conversely, when lean people artificially gain weight, they don't sit more. So the NEAT appears to be fixed.

"But as physicians, we can use this data to help our obese patients overcome low NEAT by guiding the treatment of obesity toward a focus on energy as well as food. We can encourage NEAT-seeking behaviors."