Accessibility links
'The Village' Bill Wyman reviews the DVD release of M. Night Shyamalan's latest Twilight Zone-style thriller The Village -- and finds it to be bad movie with the accompanying and appropriately bad DVD.

It's been too little appreciated how the potentials of the DVD format have, in effect, created an entity different from the artistic product that is its raison d'etre. In the real world, this all means that with the extras and commentaries and so forth, even a bad movie can morph itself into a terrific DVD. Similarly, a great movie can make for a poor DVD, if the film transfer isn't good, or if the extras are paltry. Some great movies, too, make for great DVDs. M. Night Shyamalan's latest Twilight Zone-style thriller The Village is in a fourth category -- the bad movie with the accompanying and appropriately bad DVD.

Shyamalan's films generally have some sort of scare or twist at the end, and reviewers are generally loath to reveal such surprises. So in a certain way, his films -- which include The Sixth Sense, Unbreakable and Signs -- were "critic proof." The Village has been out long enough now that it's fair to discuss the actual plot, so if you haven't seen the film and want to keep the surprise, stop reading here. 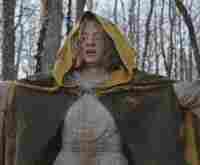 The schtick of The Village is that a unspoiled group of 18th-century Pennsylvanians has isolated itself from a corrupt outside world in the middle of a forest, which is filled with murderous predators. (The denizens of the forest leave flayed animal carcasses lying around if the townspeople get out of line.) Then someone gets hurt and another resident decides she must try to find medicine for him.

She goes through the forest and we discover that... the outside world is a modern one. The surprise is that the town's creators had created the village -- and the menace from the forest -- to get themselves out of a world in which crime was rampant, and create a safe utopia for them and their descendants.

The movie is so mystifyingly designed and presented that none of this works. The opening scenes are pastoral and seemingly allegorical. The villagers speak in a high formal dialect; the heroine is blind; and there is some symbolic folderol with the color red. Everyone is so clean and happy that an air of unreality surrounds the movie's first hour.

Once we get the punchline, we immediately try to figure out how such a feat of community isolation in the modern world could have been accomplished -- but the initial portrait was so superficial that we simply conclude that the director was dodging the mechanics of the issue. There's little indication of how clothing and food are obtained, or how elementary hygiene is accomplished. Once having implausibly made her way out through the forest, the blind woman can't even appreciate the cars or offices she encounters, another odd note. And then we have a guard -- a cameo by director Shyamalan -- giving us minutes of clumsy exposition, which absurdly purports to explain how the village was protected.

Today's urban crime rates are so low that the need for the founders to escape lawlessness has no resonance. How or why they would alter their speaking patterns (an extraordinary feat of linguistic manipulation) is a mystery. (The speech helps make us, the audience, think they're living back in the 18th century, but of course kids growing up in the village wouldn't read the dialect that way.) And how the elders accomplished the security apparatus that could ensure that each and every time the forest was explored by a young'un they would receive the appropriate scare is difficult to conceive of as well.

Finally, since there are virtually no penalties in terms of the villagers' personal comfort or health, the movie has no subtextual resonance at all. Shyamalan doesn't seem to have issues with the darker implications of the founders' plan. The village should have been a town of black-toothed, acne-scarred townspeople with a shortened life expectancy. They should have been exhausted by the work they had to do to maintain a basic subsistence level, and terrorized by a secret force of town fathers who torture animals to frighten their fellows. That would have been a powerful lesson in the futility that must accompany the pursuit of a false innocence.

The extras are such a snooze it's difficult to sit through them. There's no director's commentary. A half-hour documentary has a promising title -- Deconstructing 'The Village' -- but it's just a routine promo reel.