The following is a list of key dates in the life of Pope John Paul II (born Karol Jozef Wojtyla), 264th pope of the Roman Catholic Church, who died today at age 84:

1937-1939: Moves to Krakow with his father, also named Karol. Enrolls in the department of philosophy at Jagiellonian University; joins a theater group. When the Nazis invade Poland in September 1939, moves underground.

1972: Publishes Foundations of Renewal, about his efforts to educate the people of his archdiocese on Vatican II.

Oct. 16, 1978: Elected successor to Pope John Paul I, becoming the 264th pope of the Catholic Church, the first Polish pope ever and the first non-Italian to fill the post in 455 years.

June 2, 1979: Visits Poland for the first time as pope, setting off sparks that help establish Solidarity, the first independent labor movement in the Soviet bloc.

May 13, 1981: While circling St. Peter's Square, the pope is shot in the abdomen by a young Turk named Mehmet Ali Agca.

Sept. 29, 1983: Calls for the heads of government of the United States and the Soviet Union to negotiate an end to the arms race.

Dec. 1, 1989: Receives Soviet President Mikhail Gorbachev at the Vatican in the first ever meeting between a pope and a Kremlin chief.

May 1, 1991: Issues first encyclical on social issues since the fall of communism in Europe, giving qualified approval to capitalism but warning rich against taking advantage of poor.

March 16, 1998: Vatican issues We Remember: A Reflection on the Shoah, or Holocaust, expressing remorse for the cowardice of some Christians during World War II but defending the actions of wartime Pope Pius XII.

Oct. 18, 1998: Celebrates 20th anniversary as pope, asking for prayers to fulfill his mission "until the end."

March 1, 1999: Gives permission to start the cause of beatification for Mother Teresa of Calcutta.

March 20-26, 2000: Makes first pilgrimage to the Holy Land. In note left at Jerusalem's Western Wall, expresses sorrow for suffering of Jews at the hands of Christians. Also celebrates first papal Mass ever held in Egypt, urging reconciliation between the Vatican and the Egyptian Coptic Church, which split with Rome in the fifth century A.D.

June 13, 2000: Mehmet Ali Agca, who attempted to assassinate John Paul II in 1981, is granted clemency by Italian President Carlo Ciampi, and extradited to his native Turkey.

Sept. 3, 2000: Beatifies much-attacked Pope Pius IX and much-loved Pope John XXIII in one of the most disputed acts of his papacy.

May 4, 2001: Becomes first pope to visit Greece since Schism; issues sweeping apology for "sins of action and omission" by Roman Catholics against Orthodox Christians.

April 23, 2002: Summons U.S. cardinals to discuss sex abuse scandal; tells them there is "no place in priesthood for those who would harm the young."

May 17, 2003: Cardinal, in newspaper interview, confirms pope has Parkinson's disease.

Feb. 1, 2005: Rushed to a hospital in Rome with flu and difficulties breathing.

Feb. 24, 2005: Returns to hospital after a relapse of the flu; undergoes a tracheotomy to ease his breathing. 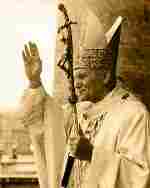