Watch clips from the 1956 sci-fi film scored by the Barrons:

Audiences cheered when they first saw — and heard — this spaceship landing scene.

Because of a dispute with the American Federation of Musicians, the Barrons did not receive a music credit for the all-electronic soundtrack they created. Their names were left off the Oscar nomination.

This clip, from the film's climax, features actors Leslie Nielsen and Walter Pidgeon. It neatly summarizes the plot and provides another example of the Barrons' groundbreaking soundtrack.

Louis and Bebe Barron composed the score for this surreal, 1952 short film, which featured Anais Nin reading from her work. 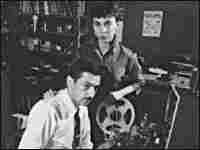 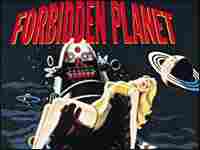 Detail from the cover of the Forbidden Planet DVD. hide caption

The 1956 sci-fi thriller Forbidden Planet was the first major motion picture to feature an all-electronic film score -- a soundtrack that predated synthesizers and samplers. It was like nothing the audience had seen -- or heard. The composers were two little-known and little-appreciated pioneers in the field of electronic music, Louis and Bebe Barron.

Married in 1947, the Barrons received a tape recorder as a wedding gift. They used it to record friends and parties, and later opened one of the first private sound studios in America. The 1948 book Cybernetics: Or, Control and Communication in the Animal and the Machine, by MIT mathematician Norbert Wiener, inspired Louis Barron to build electronic circuits, which he manipulated to generate sounds. Bebe's job was to sort through hours and hours of tape. Together they manipulated the sounds to create an otherworldly auditory experience.

The Barrons' music caught the ear of the avant-garde scene: In the early 1950s, they worked on a year-long project with composer John Cage. They also scored several short experimental films.

But avant-garde didn't pay, and the Barrons decided to cash in by turning to Hollywood. Their score for Forbidden Planet drew critical praise, but a dispute with the American Federation of Musicians prevented them from receiving proper credit for the soundtrack. Their names were also left off the film's Oscar nomination.

Union rules continued to be an obstacle, and technology eventually passed the Barrons by. Though they never scored another film, Louis and Bebe Barron, who divorced in 1970, continued to collaborate until his death in 1989.

Bebe Barron didn't compose for a decade, but in 1999 she was invited to create a new work at the University of California-Santa Barbara, using the latest in sound-generating technology. The work, completed in 2000, is called Mixed Emotions.