Accessibility links
Romeo Dallaire, Meeting the 'Devil' in Rwanda Lt. Gen. Roméo Dallaire witnessed the killing and chaos of the Hutu/Tutsi conflict in Rwanda. Scott Simon talks to Dallaire about his experience, which is chronicled in his book Shake Hands with the Devil: The Failure of Humanity in Rwanda. 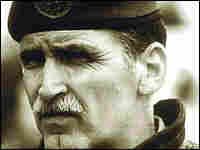 Roméo Dallaire, as pictured on the cover of Shake Hands with the Devil hide caption

Lt. Gen. Roméo Dallaire, sent in 1993 to enforce a peace agreement between warring factions in Rwanda, found himself in the middle of a bloodbath with few troops to aid his mission. Scott Simon talks to Dallaire about his experience there, and parallels with the current crisis in Sudan.

As a force commander of the U.N. Assistance Mission to Rwanda, Dallaire watched his peacekeeping mission disintegrate as rampaging Hutus killed at least 800,000 Tutsis and Hutu moderates in a 100-day period. During this time of inter-ethnic chaos and international diplomatic inaction, the Canadian officer struggled to save the lives of thousands of Rwandans.

Dallaire was so marked by the nightmare in Rwanda that he later tried to take his own life. He has since written a book about his experiences.

Excerpt from Shake Hands with The Devil: The Failure of Humanity in Rwanda, by Romeo Dallaire:

Note: This passage contains graphic descriptions of scenes of death in Rwanda.

It was an absolutely magnificent day in May 1994. The blue sky was cloudless, and there was a whiff of breeze stirring the trees. It was hard to believe that in the past weeks an unimaginable evil had turned Rwanda’s gentle green valleys and mist-capped hills into a stinking nightmare of rotting corpses. A nightmare that, as commander of the UN peacekeeping force in Rwanda, I could not help but feel deeply responsible for.

In relative terms, that day had been a good one. Under the protection of a limited and fragile ceasefire, my troops had successfully escorted about two hindered civilians—a few of the thousands who had sought refuge in Kigali, the capital of Rwanda—through many government- and militia-manned checkpoints to reach safety behind the Rwandensese Patriotic Front (RPF) lines. We were seven weeks into the genocide, and the RPF, the disciplined rebel army (composed largely of the sons of Rwandan refugees that lived over in the border camps in Uganda since being forced out of their homeland at independence), was making a curved sweep toward Kigali from the north, adding civil war to the chaos and butchery in the country.

Having delivered our precious cargo of innocent souls, we were headed back to Kigali in a white UN Land Cruiser with my force commander pennant on the front hood and the blue UN flag on a staff attached to my right rear. My Ghanaian sharpshooter, armed with a new Canadian C-7 rifle, rode behind me, and my new Senegalese aide-de-camp, Captain Ndiaye, sat to my right. We were driving a particularly dangerous stretch of road, open to sniper fire. Most of the people in the surrounding villages had been slaughtered, the few survivors escaping with little more than the clothes on their back. In a few short weeks, it had become a lonely and forlorn place.

Suddenly up ahead we saw a child wandering across the road. I stopped the vehicle close to the little boy, worried about scaring him off, but he was quite unfazed. He was about three years old, dressed in a filthy, torn T-shirt, the ragged remnants of underwear, little more than a loincloth, drooping from under his distended belly. He was caked in dirt, his hair white and matted with dust, and he was enveloped in a cloud of flies, which were greedily attacking the open sores that covered him. He stared at us silently, sucking on what I realized was a high protein biscuit. Where had the boy found food in this wasteland?

I got out of the vehicle and walked toward him. Maybe it was the condition I was in, but to me this child had the face of an angel and eyes of pure innocence. I had seen so many children hacked to pieces that this small, whole, bewildered boy was a vision of hope. Surely he could not have survived all on his own? I motioned for my aide-de-camp to honk the horn, hoping to summon his parents, but the sound echoed over the empty landscape, startling a few birds and little else. The boy remained transfixed. He did not speak up or cry, just stood sucking on his biscuit and staring up at us with huge, solemn eyes. Still hoping he wasn’t alone, I sent my aide-de-camp and the sharpshooter to look for signs of life.

We were in a ravine lush with banana trees and bamboo shoots, which created a dense canopy of foliage. A long straggle of deserted huts stood on either side of the road. As I stood alone with the boy, I felt an anxious knot in my stomach: this would be a perfect place to stage an ambush. My colleagues returned, having found no one. Then a rustling in the undergrowth made us jump. I grabbed the boy and held him firmly to my side as we instinctively took up defensive positions around the vehicle and the ditch. The bushes parted to reveal a well-armed RPF soldier about fifteen years old. He recognized my uniform and gave me a smart salute and introduced himself. He was part of an advance observation post in the nearby hills. I asked him who the boy was and whether there was anyone left alive in the village who could take care of him. The soldier answered that the boy had no name and no family but that he and his buddies were looking after him. That explained the biscuit but did nothing to allay my concerns over the security and health of the boy. I protested that the child needed proper care and that I could give it to him: we were protecting and supporting orphanages in Kigali where he would be much better off. The soldier quietly insisted that the boy stay where he was, among his own people.

I continued to argue, but this child soldier was in no mood to discuss the situation and with haughty finality stated that his unit would care and provide for the child. I could feel my face flush with anger and frustration, but then I had noticed that the boy had slipped away while we had been arguing over him, and God only knew where he had gone. My aide-de-camp spotted him at the entrance to a hut a short distance away, clambering over a log that had fallen across the doorway. I ran after him, closely followed by my aide-de-camp and the RPF child soldier. By the time I had caught up to the boy, he had disappeared inside. The log in the doorway turned out to be the body of a man, obviously dead for some weeks, his flesh rotten with maggots and beginning to fall away from the bones.

As I stumbled over the body and into the hut, a swarm of flies invaded my nose and mouth. It was so dark inside that at first I smelled rather than saw the horror that lay before me. The hut was a two-room affair, one room serving as a kitchen and the living room and the other as a communal bedroom; two rough windows had been cut into the mud-and-stick wall. Very little light penetrated the gloom, but as my eyes became accustomed to the dark I saw strewn around the living room in a rough circle the decaying bodies of a man, a woman, and two children, stark white bone poking through the desiccated, leather-like covering that once had been skin. The little boy was crouched beside what was left of his mother, still sucking on his biscuit. I made my way over to him as slowly and quietly as I could and, lifting him into my arms, carried him out of the hut.

The warmth of his tiny body snuggled against mine filled me with a peace and serenity that elevated me above chaos. This child was alive yet terribly hungry, beautiful but covered in dirt, bewildered but not fearful. I made up my mind: this boy would be the fourth child in the Dallaire family. I couldn’t save Rwanda, but I could save this child.

Before I held this boy, I had agreed with the aid workers and representatives of both the warring armies that I would not permit any exporting of Rwandan orphans to foreign places. When confronted by such requests from humanitarian organizations, I would argue that the money to move a hundred kids by plane to France or Belgium could help build, staff, and sustain Rwandan orphanages that could house three thousand children. This one boy eradicated all my arguments. I could see myself arriving at the terminal in Montreal like a latter-day St. Christopher with the boy cradled in my arms, and my wife, Beth, ready to embrace him. That dream was abruptly destroyed when the young soldier, fast as a wolf, yanked the child from my arms and carried him directly into the bush. Not knowing how many members of his unit might have their gunsights on us, we reluctantly climbed back into the Land Cruiser. As I slowly drove away, I had much on my mind.

By withstanding, I had undoubtedly done the wise thing: I had avoided risking the lives of my two soldiers in what would have been a fruitless struggle over one small boy. But in the moment, it seemed to me that I had backed away from a fight for what was right, that this failure stood for all our failures in Rwanda.

Whatever happened to that beautiful child? Did he make it to an orphanage behind the RPF lines? Did he survive the following battles? Is he dead or is he a child soldier himself, caught in the seemingly endless conflict that plagues his homeland? 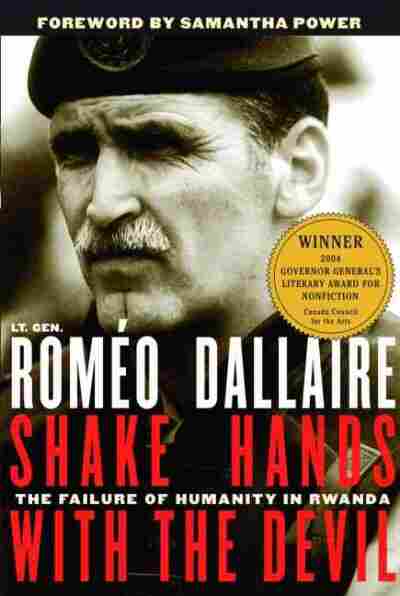 Shake Hands With The Devil

The Failure Of Humanity In Rwanda

by Romeo Dallaire and Brent Beardsley