Accessibility links
Virginia Strip-Mining Death Brings Reforms The death of a 3-year-old Virginia boy killed by a rock dislodged in a strip-mining operation has prompted the state to approve new coal-mining regulations.

An aerial photo of the accident scene. An approximately 1,000-pound rock tumbled nearly 650 feet down a steep, wooded hillside and smashed into the wall of Jeremy Davidson's bedroom, killing the 3-year-old boy. Virginia Dept. of Mines, Minerals and Energy hide caption 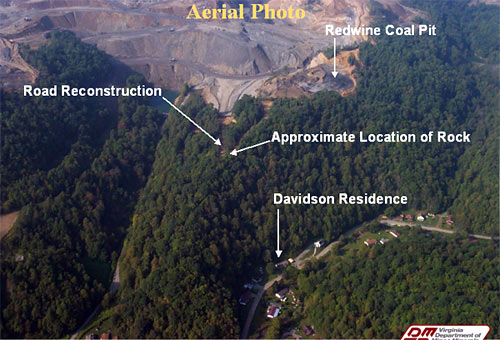 An aerial photo of the accident scene. An approximately 1,000-pound rock tumbled nearly 650 feet down a steep, wooded hillside and smashed into the wall of Jeremy Davidson's bedroom, killing the 3-year-old boy.

One night last summer, in the coalfields of Virginia, 3-year-old Jeremy Davidson was crushed to death in his bed by a rock that weighed 1,000 pounds. It had been dislodged by a bulldozer at a strip-mining site high above his home. 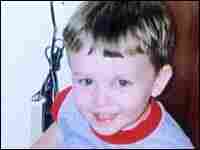 Jeremy Davidson was crushed to death in his bedroom by a large rock that became dislodged by a bulldozer on a mountain above his home. Family Photo hide caption

The price of coal has more than doubled over the last few years; more mines are opening up and many are running a second shift at night.

Investigation Report by the Virginia Dept. of Mines, Minerals and Energy

Dennis and Cindy Davidson say they moved to Inman Hollow, outside the small town of Appalachia, Va., five years ago because they wanted a quiet place in the country to raise Jeremy and his older brother, Zachery. But they say noise from coal trucks on nearby roads and jarring blasts from mining operations soon ended their peaceful nights.

The couple said they had never driven up on the mountain behind their home to look down on the vast stripping operation, with the ridges carved away to get to the coal - and they didn't realize how close the bulldozers had come.

How the rock came off the ridge Aug. 20, 2004, is not in dispute. An A & G Coal Corp. bulldozer crew was improving a road at the edge of the hillside. It is legal to work on a strip mine that close to a house -- and to work at night. But the Virginia Department of Mines, Minerals and Energy -- in its finding of gross negligence -- reported that the company didn't have a permit to change the road, the bulldozer operator was inexperienced, and even though the crew knew there were houses in the hollow below, there was no job site lighting and no extra person to keep watch.

Because of potential legal action, A & G Coal officials declined to discuss the specifics of the accident. But Scott Meade, a foreman on another job site, says: "I know for a fact that the people I work with and the people I've met from A & G are good people. The day of the accident was one of the most solemn days I've ever seen. We hate [that] it happened. It was an accident."

Virginia's pending new mining regulations would increase penalties for violations. And because of the accident, coal operators will now have to have a detailed safety plan approved before doing any work close to houses.