Accessibility links
Laura Bush: Putting Boys in the Spotlight President Bush has tapped Laura Bush to lead an effort to help boys do better in school and stay away from street gangs and crime -- a response to grim statistics on the difficulties boys face. NPR's Michele Norris speaks with the first lady about the initiative. 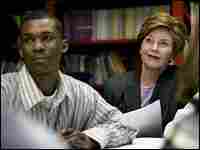 Laura Bush sits in on a discussion group for teens at the Germantown Boys and Girls Club in Philadelphia, Feb. 3, 2005. The SMART Moves program teaches teens decision-making skills to deal with drug and alcohol abuse and premature sexual activity. White House hide caption

President Bush has tapped Laura Bush to lead an effort to help boys do better in school and stay away from street gangs and crime -- a response to grim statistics on the difficulties boys face. NPR's Michele Norris speaks with the first lady about the initiative.

· The War Against Boys, by Christina Hoff Sommers

· The Wonder of Boys: What Parents, Mentors and Educators Can Do to Shape Boys into Exceptional Men by Michael Gurian

· The Men They Will Become, by Eli H. Newberger

· The Hurried Child, by David Elkind

· Real Boys: Rescuing Our Sons from the Myths of Boyhood, by William Pollack

· Why Gender Matters, by Leonard Sax

"I feel like, in the United States, that we've sort of shifted our gaze away from boys for the last several decades, and that we've neglected boys," Mrs. Bush says.

"We believe the stereotypes that boys can be self-reliant, that boys don't cry," she adds. "And the fact is, all young children -- boys or girls -- and all adolescents do need a lot of support and a lot of nurturing from their parents and their teachers and the whole community."

President Bush touched on the problem Feb. 2, in his State of the Union message. Below is a transcript of his remarks.

President Bush on the Problem

Because one of the deepest values of our country is compassion, we must never turn away from any citizen who feels isolated from the opportunities of America. Our government will continue to support faith-based and community groups that bring hope to harsh places.

Now we need to focus on giving young people, especially young men in our cities, better options than apathy, or gangs, or jail. Tonight I propose a three-year initiative to help organizations keep young people out of gangs, and show young men an ideal of manhood that respects women and rejects violence.

Taking on gang life will be one part of a broader outreach to at-risk youth which involves parents and pastors, coaches and community leaders, in programs ranging from literacy to sports. And I am proud that the leader of this nationwide effort will be our First Lady, Laura Bush.