Accessibility links
Central Park's Bright New Clothes Christo and Jeanne-Claude's temporary work of art called "The Gates" will consist of 7,500, 16-foot-high gates along 23 miles of footpaths. Free-hanging saffron-colored fabric panels will be unfurled on Saturday from each gate, coming down 7 feet above ground. 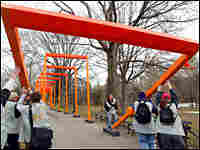 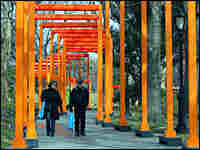 People walk through a group of gates that makes up part of Christo and Jeanne-Claude's temporary work of art. Reuters hide caption

Hundreds of workers in New York City are busy trying to complete the vision of one man and one woman, the artist Christo and his wife Jeanne Claude.

When "The Gates" are unveiled Saturday, thousands of yards of saffron-colored fabric will float from 7,500 gates placed along 23 miles of pathways in Central Park. The project has been 26 years in the making, but it will exist in its completed form for barely two weeks.

Adam Sternbergh, writer for New York magazine. Wrote an article about Christo and Jeanne-Claude and their "Gates" which appeared in the Jan. 24 issue of the magazine.

Robert Storr professor of Modern Art at the Institute of Fine Arts in New York.

Former Senior Curator of Painting and Sculpture at the Museum of Modern Art.