Accessibility links
Arthur Miller Dies at His Connecticut Home Arthur Miller, the Pulitzer Prize-winning playwright whose six-decade career gave America some of its most memorable stage dramas died Thursday night. Miller was best known for his 1949 play, Death of a Salesman, the tragic story of an American working man at the end of his rope. 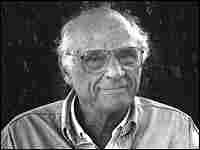 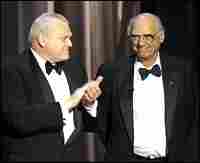 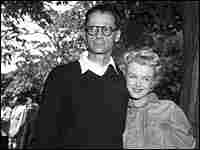 Miller and Marilyn Monroe at Miller's house in Roxbury, a few hours before their wedding. Corbis hide caption

(AP) -- Arthur Miller, the Pulitzer Prize-winning playwright whose Death of a Salesman came to symbolize the American Dream gone awry, has died at 89.

Miller, who had been hailed as America's greatest living playwright, died Thursday night at his home in Roxbury of heart failure, said his assistant, Julia Bolus.

His plays, with their strong emphasis on family, morality and personal responsibility, spoke to the growing fragmentation of American society.

"A lot of my work goes to the center of where we belong -- if there is any root to life -- because nowadays the family is broken up, and people don't live in the same place for very long," Miller said in a 1988 interview.

"Dislocation, maybe, is part of our uneasiness. It implants the feeling that nothing is really permanent."

Miller's career was marked by early success. He was awarded the Pulitzer Prize for Death of a Salesman in 1949, when he was just 33 years old.

His marriage to Marilyn Monroe in 1956 further catapulted the playwright to fame, though that was publicity he said he never pursued. They later divorced.