Accessibility links
Holy Evolution, Darwin! Comics Take On Science Comic books have become a new frontier for the portrayal of scientific ideas and the drama of discovery. But they're also a battleground for the ongoing debate between evolutionary scientists and proponents of creationism. 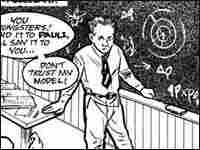 Physicist Werner Heisenberg as featured in a panel from Suspended a Language, which tells the story of Niels Bohr and the role he played in the history of science in the 20th century. Leland Purvis hide caption 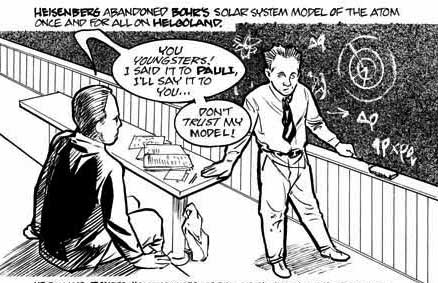 Physicist Werner Heisenberg as featured in a panel from Suspended a Language, which tells the story of Niels Bohr and the role he played in the history of science in the 20th century. 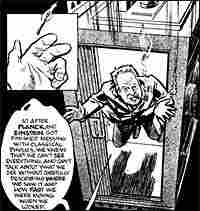 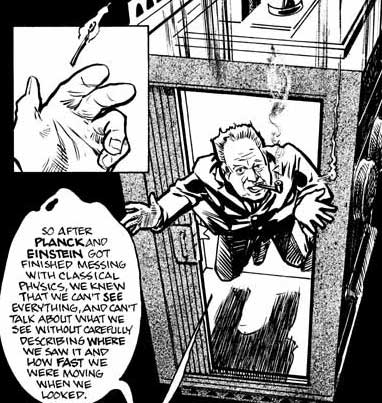 Niels Bohr pictured in a free-falling elevator in Suspended in Language.

In recent years, a few scientists and comic book artists have joined forces to portray the excitement of science, scientific ideas and the drama of discovery.

Jim Ottaviani, a longtime comic book enthusiast and trained engineer, decided to use the format to communicate scientific fact instead of fiction. He's not an artist, but he collaborates with professionals to map out storylines and explain impenetrable scientific ideas. One of his recent graphic novels tells the story of Niels Bohr, a physicist who explained atomic structure and influenced many of the other great physicists of the 20th century, including Werner Heisenberg.

That book was a collaboration between Ottaviani and artist Leland Purvis. Jay Hosler, a biologist whose work in the medium was inspired by his childhood love of superheroes, also worked on the project.

Hosler was inspired to write the work after coming across a comic that portrayed a professor denouncing evolution as a lie, and that cast as its hero a student proponent of creationism.

The comic's publisher, a Christian fundamentalist named Jack Chick, has a large following, and his materials have been used to fuel powerful anti-science movements in churches, schools and states.

Hosler says one way scientists can counter anti-evolutionists is by using comics to tell great stories.