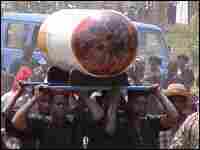 A cigarette-shaped coffin is carried in a funeral procession in the Ghanaian capital, Accra. Relatives wanted to honor the dead man's love of smoking and his cigarette business. Carrie Giardino hide caption 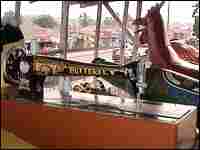 A coffin designed for a seamstress is decorated with a sewing machine. It can take up to a month to make the coffins, which are kept at the carpenter's until the funeral day. It's considered bad luck to bring the coffins home ahead of time. Carrie Giardino hide caption

For the Ga tribe in coastal Ghana, funerals are a time of mourning, but also of celebration. The Ga people believe that when their loved ones die, they move on into another life -- and the Ga make sure they do so in style. They honor their dead with brightly colored coffins that celebrate the way they lived.

The coffins are designed to represent an aspect of the dead person's life -- such as a car if they were a driver, a fish if their livelihood was the sea -- or a sewing machine for a seamstress. They might also symbolize a vice -- such as a bottle of beer or a cigarette.

Ablade Glover, an artist who works with the carpenters, says the coffin acts as a home in the afterlife, so it must be beautiful. But he laments that after putting so much time into creating the coffin, it gets hidden underground.

"By the end of the day, they are going to bury this thing, which has taken so much time, so much energy…" he says.

Fantasy Coffins of the Ga People